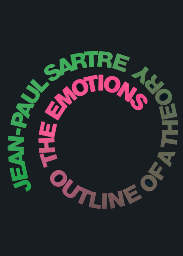 How appropriate that I 'd be reviewing this book on the fiftieth anniversary of Sartre's writing it! In all those fifty years scientists haven't learned much more about a theory of emotions than Sartre knew in 1948. [See ARJ: Passion and Reason, Emotional Intelligence, and The Emotional Brain] But Doyle P. Henderson came up with a theory of emotions some twenty ago [ARJ: PANACEA!] in the light of which I wish to examine Sartre's view of emotions. Henderson's theory may be said to form the basis for the science of doyletics — the science of the acquisition and transmission of emotional traits.

Sartre says on page 7, "Thus, emotion is first of all and in principle an accident." He says it is useless for a psychologist to ask how "the very structure of human reality makes emotions possible." Yet, rightly understood, the theory of doyletics does exactly that: it says that a human being begins developing cognitive memory capability at three years of age and switches over entirely to cognitive memory at age five.

Before age five, all bodily experiences (those physical body states called by the names, emotions, feelings, moods, and motor skills) are stored directly in a form that permits later stimuli to trigger an exact recapitulation of any stored physical body state as though it were actually happening at the time.

Thus, if we are presented with a bouquet of flowers, we attribute the feeling to the flowers and say, "Those flowers give me a thrill!" We don't say, e.g., what would be more accurate, "The sight and smell of those flowers triggers a physical body state that was stored in me when I was two years old!"

If someone were so foolish as to trace their thrill experience upon receiving flowers, they would be able to say, the next time someone surprised them with flowers on a special occasion, "These flowers remind me of flowers that I saw and smelled when I was two years old." — but they would no longer be able to feel the thrill that they had felt before! Thus it is always necessary to remind new doyle-tracers, "Only trace physical body states that you do not want to ever have again."

[page 16] If, in the manner of the phenomenologist, we wish to make of emotion a true phenomenon of consciousness, it will, on the contrary, be necessary to consider it as significative from the first.

Sartre says that "To signify is to indicate another thing." and that physiological facts signify almost nothing — they just are — yet, through doyletics we understand that the physiological facts are the physical body states that comprise emotions and that they point to events of personal history. Since we are always creating new personal history with each emotion that arises from an important event, we are easily led to believe that the current event is creating the emotion. The experience of over twenty years of doyle tracing to remove unwanted emotions permanently, however, proves the existence of an original event of personal history before the age of five. And during that original event only the physiological components of the emotion were stored.

[page 43] A woman has a phobia of bay-trees. As soon as she sees a cluster of bay-trees, she faints. The psychoanalyst discovers in her childhood a painful sexual incident connected with a laurel bush.

Sartre claims the fainting is a phenomenon of refusal to re-live the memory connected with the bay-tree. If we consider that the painful adjective is a word used by the analyst to refer to the woman's reluctance to tell what really happened, the more likely description is that the young girl swooned or passed out, overcome by the flood of sexual energy, and the current fainting as an adult woman in the presence of a bay-tree is a re-triggering of the physical body state of unconsciousness stored during the original event.

[page 55] The words which my neighbor is writing makes no demands; I contemplate them in their order of successive appearance as I would look at a table or clotheshanger. On the other hand, the words which I write are exigencies.

As I pass now from copying the above quote, I enter a new phase of writing in which the very next word has an urgency, a potential newness that I cannot guess beforehand. Watching someone in the throes of an emotional display has the same quality as that of watching someone else writing — we observe the facts in progression. But when we are the one emoting, we feel the urgency of the emotion as an exigency that we do not feel when we observe someone else. What I am wanting to claim is that, "writing is born out of the same substrate of human capability as emotion," and I feel the impulse to write those words, even though I can pause, reflect, and consider what they mean, and not be sure what I mean by them, up until now.

[page 67] The emotion of active sadness in this case is therefore a magical comedy of impotence; the sick person resembles servants who, having brought thieves into their master's home, have themselves tied up so that it can be clearly seen that they could not have prevented the theft. Only, here, the sick person is tied up by himself and by a thousand tenuous bonds.

Seen rightly, sickness, a magical comedy of impotence, is a comedy that we are expected to take seriously if we are caregivers. This is a beautiful insight by Sartre into the reason why a sick person will rebuff anyone who suggests to them that it's all in their minds — the sick person, like the servants above, must insist that it was the thieves, not themselves, that tied them up. This reminds me of the lifelong hypochondriac who had the following engraved on her tombstone, "See! I told you I was sick!"

[page 72] The actor mimics joy and sadness, but he is neither joyful nor sad because this kind of behavior is directed to a fictitious universe. He mimics behavior, but he is not behaving.

This I must disagree with — though Sartre was a writer, not an actor, and so must be forgiven. One need only observe the sterling performances that are highlighted during Academy Awards presentations to realize that these performers are behaving in a real universe that includes real people in the audience, people who will only remain engrossed in a performance if it is startlingly real. The essence of the acting art is to produce experiences in oneself that are so congruent with the scene that the audience believes that the performer and the person portrayed are one and the same.

[page 93] The study of emotions has quite verified this principle: an emotion refers back to what it signifies.

And what it signifies, or points to, is the set of physical body states experienced by that person before the age of five. To build a theory of emotions is easy if one begins on this premise. And the theory, if it is to be accepted, must have useful consequences. In the case of doyletics, the useful consequences are the ability to remove unwanted emotions, feelings, or moods in the privacy of one's home. The listing of the possible set of uses is beyond the scope of this essay. Sartre's book is a useful outline of his theory of emotions, and it has helped this author to outline Doyle Henderson's theory of emotions.

Comments on my Review by Doyle P. Henderson, May 30, 1998:
Oh, what fun I have had reading your reviews, and even printing out, in color your photo and the well-formatted Sartre's book review... Your observations, as always, are instructive, even to me, regarding PANACEA! and Sartre's work... Your remarkable capability to relate things, to see and explain their relevance and meaningful relationships, continues — enhanced by your own exposure to more things.... It will never become stale or obsolete.