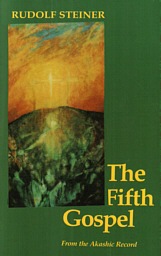 The Fifth Gospel, GA# 148
From the Akashic Record
by
Rudolf Steiner

The first unanswered question that Steiner lays the basis for appears early in the book when he, in effect, asks how it was possible for Christianity to spread so quickly in the well-educated Graeco-Roman age:

Steiner recommends that we understand the Baptism of Jesus as the conception point of the Christ, the three years until the Mystery of Golgotha as its gestation in the womb [a growing embryo], and the death of Jesus on the Cross as the birth of the Christ spirit on Earth. Whereas human beings at death leave Earth for Heaven, the Christ spirit during this birth left Heaven for Earth. Whereas a human would live in communion with the spirits [in Devachan] after death, the Christ spirit, by undergoing the events between Baptism and Pentecost, was enabled to "live in communion with human souls" in the Earth sphere.

These three years were undergone without the burden of karma by the Christ, who therefore suffered, even though he was guiltless. In addition, during these three years, the Christ spirit experienced the progressive loss of divine power as he "gradually became a human being." Christ went from the earth-shaking power of his Baptism by John in the Jordan to the powerlessness of his passion in the Garden of Gethsemane. "The pain and suffering gave birth to the spirit that was poured out on the Apostles at Pentecost." [page 43]

In his twenty-fourth year, Steiner reports that Jesus visited a pagan worship site where the people hailed him as a priest come to revive their ancient place of worship. As Jesus neared the altar the people pushed him onto it and demanded he perform an offering service for them. Jesus fell face down on the altar as if in death, and the people scattered in fear. Jesus heard the ancient voice of the Bath Kol saying to him these enigmatic and powerful words on page 51:

Amen.
The evil holds sway.
Witness of egoity freeing itself.
Selfhood guilt through other incurred.
Experienced in the daily bread.
Wherein the will of the heavens does not rule.
Because man separated himself from your realm.
And forgot your names.
You Fathers in the heavens.

If these words strike a faintly resonant note, read the lines from the bottom up, and you will discover they are the words of the familiar prayer that Jesus taught us to say after he updated the words so that the ears of the people of his time could hear them. "Our Father Who art in Heaven, Hallowed be Thy Name" replaced the last two lines, for example. (One cannot escape the presupposition in the words "you Fathers" that there may be more than one Cosmos with each its own Cosmic Father.)

In succeeding years Jesus studied with the Essenes and was leaving their place one day when he noticed the figures of Lucifer and Ahriman fleeing from outside the unpainted gates which the Essences used to enter and leave the city. A thought entered his mind that the Essenes by their practices were chasing Lucifer and Ahriman into the lives of the rest of humanity. A dream came to him in which Buddha told him that a great error of his own teachings was not everyone could pick up a begging bowl and follow him because there would be no one left to beg from.

At the age of 29 Jesus shared these thoughts with his mother, of how he came to know that the way to salvation could not be found in the pagan or the Essene way:

[page 68] These words entered into his mother's loving heart with tremendous power. Throughout the talk he had been at one with her, as though they were one. The whole soul and the whole I of Jesus of Nazareth lay in those words.

Both Jesus and his mother were changed after this talk. Jesus left the house in a dazed state, and found himself walking towards the Jordan River where John was performing baptisms, and asked to be baptized. Once baptized, Jesus as the vessel of the newly born Christ spirit walked into the desert to be alone. Whereupon the three temptations occurred. Steiner explains the first temptation was from Lucifer. It was a temptation that the Christ spirit had battled arduously with Lucifer during the old Moon epoch. As such Christ was able to tell Lucifer, "Begone!" During the second temptation, Ahriman comes to the aid of Lucifer, offering to protect Christ from fear. Once more the temptation is easily overcome.

For the third temptation, Ahriman chases Lucifer away, and dares Christ to "turn stones into bread." This is again turned away by Christ with the famous words, "Man does not live by bread alone but by every word that comes from the mouth of God." Ahriman's reply, according to Steiner, was:

[page 73] You may be right. But the fact that you are right and the extent to which you are right cannot prevent my having a certain hold on you. You only know how the spirit acts that descends from the heights. You have not yet been in the human world. Down there you find people who truly need to turn stones into bread. They cannot possibly live by the spirit alone.

Ahriman had been on the Earth much longer than Christ, and had an edge in his practical knowledge of humans, knowledge of the way they actually operated, whereas Christ had knowledge of the spiritual world, the way that humans were destined eventually to operate. Christ was bringing the word from on high, but that word did not live in the souls of humankind at that time. The Achilles' Heel, the vulnerable spot of Christ was laid bare by Ahriman in the third temptation. When the Sanhedrin required someone to identify Jesus, the mechanism they used was pieces of silver [stones of silver that could be exchanged for bread].

Why was Judas's help required to identify Jesus? Steiner's answer clarifies another puzzle of the Gospels for me. The Christ spirit, as it began to reside deeper and deeper in the body of Jesus, at the same time began to inhabit the bodies of the apostles, so that at any one time, the Christ spirit could speak through any one of the apostles, changing his face so as to make him appear to be the Christ. Thus it was necessary for the Sanhedrin to hire someone from the inner circle of the apostles to identify Jesus.

In one paragraph, Steiner lays out for us the power of the unanswered question:

[page 150] We only learn to ask questions when we are able to develop the inner balance that allows reverence and devotion to be retained when it comes to the sacred spheres of life, and when we are able to have an element in us that always seeks to remain independent of even our own judgment in relation to anything that comes to us from those spheres. We only learn to ask questions by being able to develop an expectant mood, enabling life to reveal something to us; by being able to wait; by feeling some hesitation in applying our own judgment especially in relation to anything that should flow in a sacred way from the sacred spheres of existence; by not judging but asking questions, not only of people who may be able to tell us, but above all of the world of the spirit. We should face that world not with our opinions but with our questions, indeed in a questioning mood and attitude.

One of the ways of developing an expectant mood that I find very useful is to follow my statement of a limitation by stopping, taking a deep breath, and adding the words up until now to create possibilities and expectancies where none existed before. Here's two examples [the comma marks the deep breath]:

I haven't had an easy way to develop an expectant mood in my life, up until now.

I have lived a life of limited possibilities, up until now.

If we allow and encourage an expectant mood to develop in our life, we thereby encourage life to reveal something to us freely that we probably would have never discovered. This is the power of the unanswered question. Sometimes the unanswered question provides the answer to us by way of a hard lesson in life. That is what happened to Jesus in his betrayal by Judas.

Steiner says on page132, 133: "Ahriman lives in our money. Judas' deed was the question put by Ahriman that could not be fully answered." Here Steiner presents us with an important unanswered question that we humans must answer, not with a flip automatic response, but with deep, heartfelt searching. Only out of such an endeavor can an original answer from each individual I appear for us. That, I believe, is what it is to be human, and anything less is copying, imitation, and kitsch: to be human is to develop an individual answer that suits our I. Call it what you will: free will, freedom, or spiritual activity, is it not a crowning achievement of the quadripartite human being at this stage of Earth evolution?

To Obtain your own Copy of this Reviewed Book, Click on SteinerBooks Logo below and order a copy of this book.
.