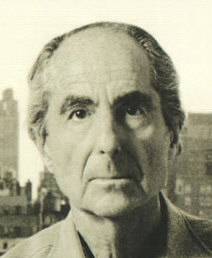 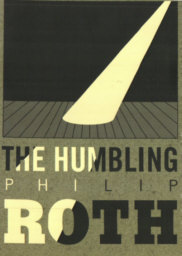 The Humbling
A Novel

If, like me, you only know Roth by his reputation for Portnoy's Complaint and you admired Ali MacGraw's lithe body in the swimming pool during the movie Goodbye, Columbus, based on a Roth novella, you might wish to try his latest and last novel, The Humbling. Based on this admittedly scant knowledge of Roth, I expected this novel to contain some steamy scenes, which it does. Plus, it's short and a quick read.

Here's the introduction to the hero (the plot is 'hero goes on a journey') in which we discover Axler's Complaint, Simon can no longer act. Surely a frightening thing for a stage actor of long-standing.

[page 1] He'd lost his magic. The impulse was spent. He'd never failed in the theater, everything he had done had been strong and successful, and then the terrible thing happened: he couldn't act. Going onstage became agony. Instead of the certainty that he was going to be wonderful, he knew he was going to fail. It happened three times in a row, and by the last time nobody was interested, nobody came. He couldn't get over to the audience. His talent was dead.

"He was a sane man playing an insane man", Simon thought, and his wife Victoria left after his collapse to be with her son in California. Simon was alone and suicidal. But if suicide was an act, and Simon could no longer act, even in his own life, his own stage play where he was the producer, the director, the playwright, the sole actor, and the audience, all rolled into one. His stage was upstairs and his shotgun his only prop. His long arms could easily reach the trigger with the barrel in his mouth, but unlike playing Prospero and Macbeth on stage in front of a live audience, he was unable to pull the trigger on the stage of life. He got exercise, treading up and down the stairs to begin the last act of his life, but always came back down unsatisfied, alive and incomplete.

He saw a psychiatrist, a Dr. Farr, but he was far from being helpful. Oh, he came up with a name for Axler's complaint, "a universal nightmare", but it was a nightmare which beset non-actors when they imagined being due to go on stage for a role and found themselves unable to act. To protect himself from suicide, Simon asked to be admitted to a hospital. The staff tried to keep him busy to keep him from suicidal thoughts, but when he found time he was talking to other patients, who turned out to be suicidal themselves, each of which had failed in their attempts. They talked about those who succeeded like a normal person might talk about a sports hero. Axler rarely talked.

[page 15] One evening Axler spoke up — to perform, he realized, before the largest audience since he'd given up acting. "Suicide is the role you write for yourself," he told them. "You inhabit it and you enact it. All carefully staged — where they will find you and how they will find you." Then he added, "But one performance only."

Luckily Axler didn't like one-night stands. He met a gal named Sybil in a therapy group who would eat dinner with him and revealed the sad story of her new husband having sex with her little girl and how she wanted to hire someone to kill him and asked Axler if he would. Axler said he would do it for free if he were a killer. Soon Axler was back home and his agent Jerry comes by with an acting offer. Axler turns it down, but has a long conversation with Jerry.

[page 31] "What do you do with the days?" Jerry asked.
"Walk. Sleep. Stare into space. Try to read. Try to forget myself for at least one minute of each hour. I watch the news. I'm up to date on the news."

Later he got a long letter from Sybil, who thanked him for listening to her without treating her as being crazy. Axler realized that listening to Sybil had helped him regain a tad of his own sanity. Then Pegeen showed up in his life, the daughter of a couple he had been friends with when Pegeen was a small girl. Now she was a full-blown woman in her forties with a lesbian past, now behind her she said. Axler liked buying clothes and nice things for her and soon they were having breakfast together the morning after.

[Page 61, 62] Nonetheless, one morning at breakfast, as much to his own surprise as hers, Axler said, "Is this something you really want, Pegeen? Though we've enjoyed each other so far, and the novelty has been strong, and the feeling has been strong, and the pleasure has been strong, I wonder if you know what you're doing."
"Yes, I do. I love this," she said, "and I don't want it to stop."
"But do you understand what I'm referring to?"
"Yes. Matters of age. Matters of sexual history. Your old connection to my parents. Probably twenty other things besides. And none of them bother me. Do any of them bother you?"

Axler tried to break it off before one or both of them got hurt, but Pegeen pointed out that they had both been hurt, him by his wife's leaving, and Pegeen by her previous partner Priscilla's betrayal. Then Pegeen's parents find out and her dad keeps calling and putting pressure on her to leave Axler.

One night Axler and Pegeen pick up Tracy, a gal who was drunk at a bar and take her home with them for a threesome. Suddenly things get very dicey: will Pegeen stay with him or go off with Tracy, a salesgirl at a rural antique shop? If so, how can Axler the actor bear such a humbling, such a humiliation? Will he take his gun back upstairs for another shot at instant immortality? How will he ever manage to pull the trigger? If it were a play he were acting in, he could do it, he thinks. What if the attic were a theater? If he's successful, he will go out with a bang!