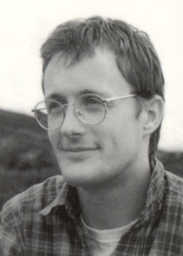 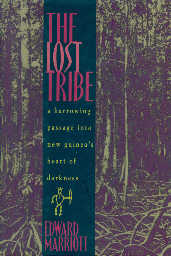 The Lost Tribe
by
Edward Marriott

What if you were a journalist and heard about a lost tribe in the mountain wilderness of New Guinea? What if you flew there to visit the tribe, asked permission of the authorities and were turned down? What would you do? What Marriott did was organize a trip to visit the lost tribe on his own. A trip that involved a destination no one was sure of, over a path nobody in his makeshift native crew knew for sure how to follow to find a tribe that didn't want to be found and were likely to be very dangerous if they were found. One might think that Marriott would have been luckier to have returned home without finding the tribe, but then there wouldn't be a book, would there?

He found the tribe, well, he found the empty village that the tribe left behind as soon as he appeared. In a couple of days he found a missionary, curiously named Herod, who had a makeshift church and a congregation that preferred to hide in the jungle instead of come to church when the white skinned man appeared. But soon the Liawep, a tribe that only appeared to the outside world two years earlier, came out bit by bit to meet the white man, always asking what the white man wanted through the native interpreters. The Liawep were only 79 strong and their only clothes were leaves. Their diet was taro and yams dug from the jungle. They had no medicine and were only discovered because an elder was dying and his grandson, Kohi, walked for days to the nearest civilization to get help. What he got instead was a taste of civilization and he didn't return until the grandfather had already died. Soon a lot of people wanted to find the lost tribe, to convert them to their brand of christianity, to write about them in their journals and anthropological field notes.

The word "liawep" means small tribe and there were two small tribes that it might refer to. One was about a days' walk and the other about six to eight days. Marriott's informants didn't know which one he wanted to meet, but they thought it was the one farther away. If they found the one that Herod was administering to, then they would know it was the right tribe. Eight days might not seem like a long time for a walk in the jungle, but this jungle was anything but flat. They spent most of their days climbing up almost vertical sides of the mountain, ankle deep in mud. When they reached level areas there was usually a precarious walk across a rickety bridge held together with jungle vines spanning a raging torrent many feet below. Sometimes the bridge wasn't high off the river, but dipped down several feet into the swollen, rushing waters.

When Marriott and his crew reached the village, he found a rather meek folk, and nothing of the fierce warriors who never lose a battle that he'd heard about. Finally he befriended Fioluana who told him the Liawep's secret about their mountain:

[page 159] "Before Peter Yasaro came, we still fight our enemies, we praise the mountain. We praise it before we go and fight. Then we win the fight; the mountain tells us when to fight and when to stay at home. We yell out the names of our enemies. Our enemies have heard about our mountain. They are frightened of it."

After some time, Marriott began to understand the Liawep and their relationship to the jungle.

[page 179] For me, the jungle was the dark unknown, a place without markers, with not beginning and no end. For the Liawep, it was home. But more than this, it had become the landscape of their mind. The jungle floor was littered with meaning. The gurgle of the brook across a plate of pebbles was a child spirit's laughter; the papery crumble of leaves was another spirit's skin, shed in a hurry; birdsong was the calling of the other world. The Liawep, ever wary of my curiosity, dropped this much inadvertantly.

On the day before they planned to leave, Fioluana and the hunters were off on a hunting trip, and Marriott's crew was packing when a large thunderstorm with lightning bolts flashing rolled through the Liawep village. One of the large bolts split open the hut sheltering Fioluana's wife and four children, killing all but the baby and leaving them covered with white ash on the floor of the hut. Marriott was in shock, but his crew had a practical consideration: they wanted to leave before Fioluana got back with the hunters. They feared that the angry hunters would not understand anything but that it was the white man's fault that the mother and three children had been killed and covered in white ash. They left the next morning and met the hunters about halfway down the mountain as they were returning all happy from their successful hunt. The hunters gave them a pig to eat and headed for their village without being informed as to what to expect when they arrived there.

The ending will await your reading, dear Reader, but the fact that the book exists gives you a strong clue that the author survived the ordeal. He broached the deepest part of the Papua Guinea jungle and returned to tell about it. He found the lost tribe and went away leaving a path of destruction in his wake like so many other well-meaning explorers. Would the Liawep family have been destroyed by a lightning bolt from the angry mountain if he had not set foot in their village? No one will know, but Marriott will spend many years wondering.