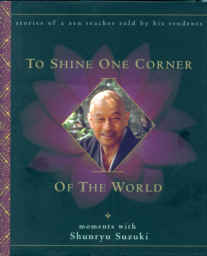 To Shine One Corner of the World
Edited
by
David Chadwick

Suzuki Roshi was a familiar name to me because Natalie Goldberg had mentioned him in a couple of her books, Thunder and Lightning and Long Quiet Highway. This book was actually written by the Roshi's students and compiled and edited by David Chadwick, also his student. Each page consists of one short vignette, often not more than a few sentences occupying but an inch or two of text at the top of the page. Thankfully no explanation is offered for the terse comments or precision actions of Suzuki Roshi. The editor offers us a peach and does not remove the flesh of the peach before handing it to us, so that we may gain the full nourishment the peach provides. This book, rightly understood, is a bowl of peaches.

Roshi knew the difference between himself and his students, as he told one of them, "I have students and you don't." Every word, every action was a teaching situation. This is a book that cannot be reviewed but only placed like a lamp on a bushel basket to allow each page to shine one corner of the world.

Chadwick writes in the Introduction, "Suzuki's main teaching was silent  the way he picked up a teacup or met someone walking on a path or in a hallway, or how he joined with his students in work, meals, and meditation. But when the occasion arose to speak, he made an impression. This book is a record of such impressions."

[page 13] A student, filled with emotion and crying, implored, "Why is there so much suffering?"
Suzuki Roshi replied, "No reason."

[page 18] Once a student asked Suzuki Roshi, "Why do you have forty-minute zazen periods, when most Zen teachers in America have only thirty? My legs really hurt when I sit for forty minutes. Won't you consider having thirty-minute periods, at least in sesshin?"
Suzuki replied, "That's very interesting. I've been thinking that we should have fifty-minute periods." After a pregnant pause, he added, "But maybe we can compromise. Let's make it forty minutes."

[page 24] A flamboyant young man with long hair and beads around his neck had been trying hard to practice Zen at Sokoji while continuing his hippie lifestyle. One day he asked Suzuki Roshi a question about marijuana and Zen, to which Suzuki answered, "Maybe you smoke too much marijuana."
"Okay," the fellow said, "I'll quit. You're the boss."
"No!" Suzuki said. "You're the boss!"

[page 30] Once in a lecture Suzuki Roshi said, "Hell is not punishment, it's training."

[page 45] In dokusan a student repeated something that Suzuki Roshi had said in a lecture.
Suzuki shook his head.
"No?" the student asked, "but you said . . ."
"When I said it, it was true," Suzuki answered.
"When you said, it was false."

[page 60] Once while driving Suzuki Roshi back to San Francisco from Los Altos, I asked him if there was much hope for that handful of middle-aged, suburban housewives to accomplish anything as Zen students. After all, I thought, they only sat together once a week, unlike we students, who sat daily at Zen Center.
He told me their understanding was "actually pretty good," and he noted, "They don't seem to suffer from arrogance."

[page 84] As I was telling Suzuki Roshi what a disaster my life had become, he began to chuckle. I found myself laughing along with him. There was a pause. I asked him what I should do.
"Sit zazen," he replied. "Life without zazen is like winding your clock without setting it. It runs perfectly well, but it doesn't tell time."

[page 88] During a discussion, someone asked Suzuki Roshi if he ate meat.
"Yes, I do," he replied.
"Buddha didn't eat meat."
"Yes, Buddha was a very pious man."

These last two stories reveal the basic humanity of Suzuki Roshi as he "sets the clock" of these two students.

[page 121] A student who had just concluded a thirty-day zazen retreat with two enthusiastic dharma pals asked Suzuki Roshi how to maintain the extraordinary state of mind he'd attained.
"Concentrate on your breathing, and it will go away," Suzuki said.

What would Roshi do? One cannot even guess from reading these stories  if by guessing you expect an answer in the form that so many of these students did when they asked their questions. Their questions spoke volumes to Roshi of how much these students had to learn, about life, about Zen, about themselves. My guess is that he would know enlightenment had come to them when the questions stopped. Questions like this one:

[page 14] At a question session with Suzuki Roshi at Sokoji, a young man asked, "What should a Zen practitioner do with his spare time?"
Suzuki at first looked perplexed and repeated the phrase, "Spare time?" He repeated it again and then began to laugh uproariously.