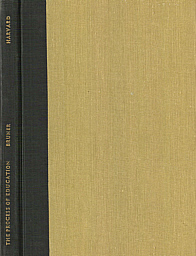 A READER'S JOURNAL
The Process of Education
by
Jerome Bruner
Published by Harvard University Press, Cambridge, MA in 1963

In this classic work Bruner divides the process of education into four basic parts: structure, readiness for learning, intuitive thinking, and motives for learning. These form the major chapter headings for the book.

He tells us that when we grasp the structure of a subject, it enables us to relate many other things that would otherwise seem unrelated. For example, he explains how understanding the structural concept of tropism in biology enables one to make sense of many other phenomena.

[page 7] The swarming of locusts where temperature determines the swarm density in which locusts are forced to ravel, the species maintenance of insects at different altitudes on the side of a mountain where crossbreeding is prevented by the tendency of each species to travel in its preferred oxygen zone, and many other phenomena in biology can be understood in the light of tropisms.

The more fundamental the idea is, the wider and more powerful will be its applicability. Bruner applies this principle to the subject of curriculum enhancement and "how best to proceed in the teaching of different subjects in different grades." The goal he offers is to tie the knowledge into a structure that both makes it both worth knowing and usable in areas beyond the learning situation.

The chapter on readiness for learning offers guidelines in dealing with the evolution of consciousness in students. Twelve year olds have no problem with playing games that involve advanced mathematics, but are not capable of understanding a formal description of those same mathematical rules. To push for understanding such formal rules leads to the ability to create accurate but incorrect answers. Mathematics has to do with correct answers whereas computation has to do with accurate answers. One confuses the two with peril. In my childhood a soda was a nickel, but a six-pack of sodas sold for a quarter. If a visitor from France sent me to the store with a quarter to buy sodas at a nickel apiece, he would calculate accurately that either I had stolen a soda or the proprietor had miscounted my purchases when I returned with six instead of five sodas. His calculations would be accurate, but incorrect. This insight into the difference between accuracy and correctness I owe to Rudolf Steiner from whom I adapted the above story.

Bruner says on page 40 that "nothing is intrinsically difficult" if we "wait until the proper point of view and corresponding language for presenting it are revealed." He includes in this chapter a memo of Professor Inhelder of Geneva which detailed many ways one can assist children in their progress through the fields of mathematics and physics.

[page 43] Basic notions in these fields are perfectly accessible to children of seven to ten years of age, provided that they are divorced from their mathematical expression and studied through materials that the child can handle himself.

When I was a child I spent long hours in play with odd pieces of wood, blocks, spools, and other odd bits of scrap around the house, so I found the following portion of Inhelder's memo fascinating as it suggests just that sort of play as a precursor for fostering understandings in the child that can serve as a foundation later for formal courses in mathematics and physics.

[page 46] One wonders in the light of all this whether it might not be interesting to devote the first two years of school to a series of exercises in manipulating, classifying, and ordering objects in ways that highlight basic operations of logical addition, multiplication, inclusion serial ordering, and the like. For surely these logical operations are the basis of more specific operations and concepts of all mathematics and science.

In his book The Kingdom of Childhood Rudolf Steiner explains that the amount of time that a child can sustain a learning episode without fatigue is a function of how well the teacher approaches the process of teaching. With this insight he designed his Waldorf Schools to include long sustained periods of teaching the same subject, e. g., mathematics might be taught, not in one hour chunks every morning, but for the entire morning every day until the subject is completed, and then the students would move onto another subject, such as biology. Does it work? Students love this method so much that when one student was required to stay after school to do sums, the others in class wanted to know why they couldn't also stay to do sums. This process of teaching is what Bruner is hinting at for broad application in our school systems.

[page 51] It seems fairly obvious, for example, that the longer and more packed the episode, the greater the pay-off must be in terms of increased power and understanding if the person is to be encouraged to move to a next episode with zest.

In the chapter on intuitive understanding, Bruner says that we might not know exactly what that means, but we can all "distinguish between inarticulate genius and articulate idiocy." It occurred to me that these two represent two points of the four steps toward Habit Formation that I learned from Don Robinson in a memory course in 1970:

In the process of education, the idiot or naive learner doesn't know he doesn't know anything about a subject. Someone comes along and says, "Hey, don't you know how to do this?" and he moves to being able to say, "Hey, I don't know how to do that." He goes on to study long and hard and becomes a expert, a genius, in that field. He knows how to do it when he consciously applies himself, but is not necessarily able to explain to others how to do it, he is the consciously competent, but inarticulate genius. Only after years of application of his skills and thinking about how best to describe it does he become the articulate genius of Step 4.

In the last chapter Bruner tells a beautiful story about a college professor teaching an advanced class in quantum mechanics. Here's how the professor described his experience: