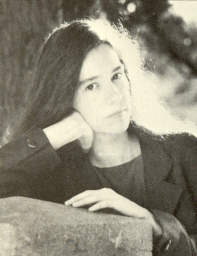 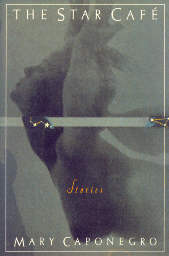 
The Star Café
and Other Stories
by
Mary Caponegro

Published by Charles Scribner's Sons, NY in 1990
A Book Review by Bobby Matherne ©2003


I Always Look Up Egregious is the title of a book I recall from the last century whenever I find a new word in a book I'm reading. The "last century" is an interesting phrase that none of us born around the middle of the last century ever got to use before, so there's a lot of pent-up demand. I know I was all set to use it "often and early," like the supporters were urged to vote in Boston during the last century: VOTE OFTEN and EARLY for JAMES MICHAEL CURLEY, but my former determination has tapered off to velleity. Now there's a rare and interesting word velleity — one might go to the unabridged to find a definition for that one! So rare that the proofreader let it slip by on page 130 with only one 'l' which made my determination to find its meaning awash in confusion because there was no such word as veleity in the 2662 page dictionary I was looking in. Would I have to take out my magnifying glass to search the 16,000 page OED condensed? Luckily my eyes kept scanning the page to find the word velleity which means "imperfect or incomplete volition" or simply put, "the lowest level of desire". Nice to have a word for the other end of the spectrum of determination. Thanks, Mary.

But I digress. Don't you just hate writers who say, "But I digress" as though the reader is supposed to forgive them for poor writing? What was I writing about anyway? Oh, The Star Café! It's a lovely story set in a surrealistic café that opens up through a door that shouldn't be there where Carol goes to do things she shouldn't do in front of others alone.

"Back in Ten" begins the novella of Sebastian that fills the second half of this book of stories. Sebastian — can one ever recover a naive view of that name after Brideshead Revisited ? This Sebastian is special, in the way that only Englishmen in America can be special. He expects service and is instead confronted by these almost illegible scribbled notes like "BACK IN FIFTENE" left in places where one would expect service instead of public displays of illiteracy.

[page 94] That's America, thinks Sebastian. That's America all over. If Napoleon disparagingly labeled England "a nation of shopkeepers," what then might one call this nation, which cannot even competently accomplish this function?

"A nation of Internet users," perhaps? Like the railroads of the 18th Century, the Internet is the newest means of fast communication and immediate gratification of desires, and as such is making instant millionaires and billionaires of those riding the new cybernetic railroad to riches. Shops and shopkeepers will soon be passé, replaced by websites and e-commerce. Why, just the other day I saw my first e-adjective on a billboard, and I'm e-fraid to tell you what it was. Now we've all seen email, e-money, and such e-nouns before, but this was the first e-adjective, so I thought I should be the first to create an e-adverb and e-mediatelytm came up with one. Naturally I trademarked my prototype e-mediatelytm in the best tradition of American commerce. I can see it now, our newest slogan emblazoned all along the Information Superhighway with flashing banners in hyper-colored text:

P. S. For insight as to my writing style for this review, see The Art of Fiction by David Lodge.