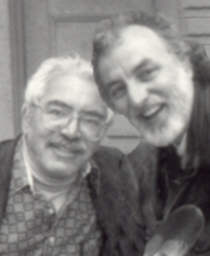 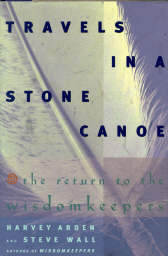 Travels in a Stone Canoe
by
Harvey Arden and Steve Wall

Remember the old saw about the "lead balloon"? Balloons are supposed to float up gracefully into the sky and a lead balloon will simply fall with a thud. Well, put two white guys in stone canoe and you get a similar effect. They did manage to float another book in their stone canoe. A book full of "Gee, you're wonderful, Chief Running Bare!" stories about how great the Indians are and how terrible the White Men are. Threadbare is what the storyline becomes as this mantra is chanted ad nauseam as the Stone Canoe goes on and on and on.

No, I didn't read their bestseller, The Wisdomkeepers. The Stone Canoe gives the story behind the stories in Wisdomkeepers. The two authors recount their travels across the country into the holy places of the native American tribes, but never once do we hear about the native tribes of the authors or their holy places. Do they have any holy places? Or must they discover the sacred in other cultures because they have lost sight of the sacred in their own lives?

Harvey hears loud beating wings at night in Peru and writes about his experience:

[page 27] I had somehow cracked the eggshell of disbelief that had hitherto safeguarded me, the objective journalist, from those nonobjective experiences that lay at the core, the inner quick, of indigenous thinking and belief.

Indigenous means "not introduced into a particular land from the outside" and Harvey, as a descendant from European stock is discovering the "inner quick of indigenous thinking and belief" of the indigenous peoples of his adopted land. Yet, his ancestors in Europe were natives to that land and they were infused with the inner quick of indigenous thinking and belief that Harvey apparently leaves at home when he goes on the road to discover in the native Americans the living center of his own being. A center that has grown cold and encrusted with long years of familiarity and contempt — resulting in a total misunderstanding and disregard for the living legends of his indigenous culture as they are brought forward to the current time in form of Northern European fairy tales, among other things.

At one point in the story, Harvey questions Steve about the authenticity of this Indian he wanted them to do a story on, Two Trees. Harvey wanted to ask Steve, "Was this guy authentic? Was he a real medicine man?"

[page 29] I could almost hear Steve grimacing over the phone. He had heard me out. I'll never forget one thing he said: "Harvey, why is it Indians always have to be real or authentic?" I've never heard anyone ask if a white man was real or authentic. Can you answer me that?"

This shows how easily one can get in awe of a native culture. Most of us have heard such a question in our daily lives, "Is that guy for real?" "Is he an authentic doctor?" There are fakes and authentic people in all cultures, and by chronicling their interfaces with the native American cultures this book can help others to see the similarity with their own daily lives. A worthy objective.

Everywhere they went they were outsiders and treated as such, but they were let into some of the ceremonies and taught to see the world as an Indian, so that they might espy the other world of the Indian. They were treated with caution, because they were wasichu — the stealers of the fat, which is the name the Indians gave to the white men because some trapper in the early days stole into a tent in the middle of winter and stole the fat from the tribe. If he had asked permission, they would have shared it with him, because without fat in the winter one will die. Instead he took it without permission and left the entire tribe in danger of starvation for the entire winter. Harvey and Steve learned to ask permission before joining a ceremony or taking a photograph, and they earned the respect of all the native peoples they encountered.

Not all the setters in early America were "stealers of the fat" — but that early trapper may have gone on to become a politician serving in Washington where the biggest wasichu are located, to this day. Steve and Harvey learned about the wasichu from the native American perspective, but have they learned to spot the wasichu in their everyday lives? Do they know that they vote for wasichu every time they enter a polling booth, for example?

Here's another quotation, this time from an Ojibway spiritual elder, Bawdway Wi Dun. In his words echo the words of an indigenous European medicine man, a great spiritual leader and teacher by the name of Rudolf Steiner, as he wrote them in 1898 in his landmark book, The Philosophy of Freedom. Steiner says in that book, "Each of us is called upon to become a free spirit, just as every rose seed is called upon to become a rose." The subject of freedom, rightly understood, must always center on sovereignty.

Do Harvey and Steve learn from their contact with the native Americans? Yes, undoubtedly. But near the end of the book, after seeing an owl in the redwood forest, Harvey exclaims, "It's my owl! He's come to join our ceremony." That's quite a change for Harvey, but then he adds, "If that's a sign, I'll take it." Makes me wonder whether Harvey is still stuck in "if" — that great foible of the wasichu, if — the word of skepticism and doubtfulness, the word of destruction of deep meanings. Later at Leon's funeral, Steve is taken aback by the level of illumination in the room, too bright to come from the bare bulbs in the ceiling. Does he see this as ethereal, supersensible light? Well, judge for yourself. He says, "Of course, it could just be in my mind." Steve is still stuck in "could just be in my mind."

Now, dear Reader, this review has come to an end, so I ask you in the words of Charlie Knight, Ute, "When ya leavin'?"