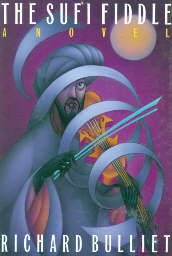 The Sufi Fiddle
A Novel
by
Richard Bulliet

Castle Winter, a real estate analyst and student of Arabic languages was serving on a grand jury when a violin is presented in evidence. Inside the violin is inscribed five lines of an obscure Arabic language. Under the tutelage of punk rocker Pansy Garden, Castle is introduced to the strategies of the "text adventure" where the strange old man you passed on the street would have given you a million dollars if you had only asked him a question as you walked past.

Thus begins an adventure. What do the words inside the old fiddle mean? Why is the old violin so sought after on two continents? Who is Moora Makki? By the end of this sprightly adventure I found the answer to two of the three questions.

But first we must accompany Castle to Oman where the Sufi Brotherhood awaits to question him about the whereabouts of the violin. But Castle doesn't dance fast enough and must be carried off the dance floor.

He flies to Pansy's side in a New England coastal village where he must impersonate a GAO inspector to explore the workings of DJones Company inside a submarine tower.

Shootings, accidental deaths, imprisonments, and foreign intrigue fill the covers of this book. Castle gets his girl, Pansy gets her latest man, and the fiddle keeps fiddling along with a new owner.

What did the words in the fiddle mean? In the Afterword of the book I discovered that this is the "unanswered question" that led the author to write this tale in the first place. The fiddle was a real fiddle, the words were real, and the translation is what the author is still hoping to discover from some willing and able translator of obscure Arabic languages. Sounds to me a more reasonable and profitable way to spend his time than Castle Winter and Pansy Garden chose to spend their time within the delightful story that comprises this novel.

In the process of spinning a tale of intrigue that explains the other mysteries, the author leaves us with the mystery that inspired him to write the novel in the first place.