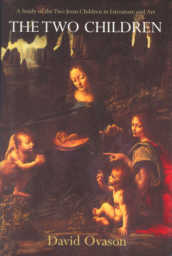 The Two Children
by
David Ovason

A Book Review by Bobby Matherne ©2005

This book, in the words of the blurb which led me to purchase it, "explores the now obscure(1) tradition that two babies called Jesus were born in Bethlehem to two sets of Joseph and Mary." My interest in this subject stems from Rudolf Steiner's lecture on the Gospel of Luke in Basel in 1909. My review of those lectures details how the two Jesus children grew up and ended up in the Nathan-descended Jesus being baptized by John in the Jordan and becoming Christ Jesus for three years before dying in the Mystery of Golgotha. My intention in reading this book was simply to research whether there was credible evidence of there being two Jesus children outside of the credible evidence of Rudolf Steiner's insight into the spiritual realities of the time which he shared with the world in the aforementioned lectures. What I found was multiple instances of evidence in paintings stemming from the Middle Ages when the abilities Steiner possessed a hundred years ago to perceive events in the spiritual world were a more common human ability. Evidence of two Jesus children, if commonly known at the time, would likely exist in many artworks of the time, and those would have come down to us and have survived the passage of time and the evolution of humankind.

Paintings suffer from the ravages of time — paint discolors, fades, is rubbed away, etc., but the content of the painting will remain even if the condition of the paint deteriorates. It can be restored. Paintings produced during a time when their artists could see into the spiritual world are also subject to human evolution in the following way: centuries after some paintings were produced, it was not a common ability to perceive the spiritual world, and how people interpreted paintings of the two Jesus children changed. Specifically, they saw the second Jesus child as representing John the Baptist. In more recent centuries painters who saw two Jesus children and wished to portray them were forced to use the artifact of putting an animal skin over one of the children to suggest John or their patron would not pay them for their work.

When you add up the evidence in the oils and sculptures, it matches Steiner’s insight that there were two Jesus children. It also supports his theory that human evolution proceeded into materialism and caused humankind to lose their perception of the spiritual world. Once humans could no longer see the spiritual reality, they interpreted the paintings of the two Jesus children as showing the second child to be John the Baptist. This book provides the evidence and insight into the evidence that is sorely lacking in the world of religious art, up until now — until David Ovason’s brilliantly researched and amply illustrated book in which one can see the evidence from hundreds of museum paintings and decide for oneself whether there were two Jesus children or not. 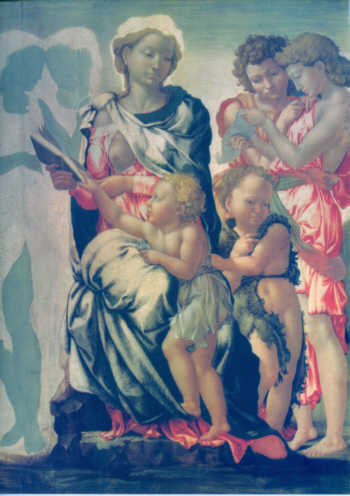 The cover art from the book, The Two Jesus Children, by Edward Reaugh Smith shows the Three Wise Men from the Matthew account on the left side of the image and the Shepherds from the Luke account of the Christmas Birth story on the right side (See Book Cover, upper right corner of review.) Thus the artwork metaphorically portrays the confluence of the two Jesus children into one Jesus boy who grew in age and wisdom to become the Jesus of Nazareth to be baptized by John. In his book,Smith details the scenario of how this confluence occurred. 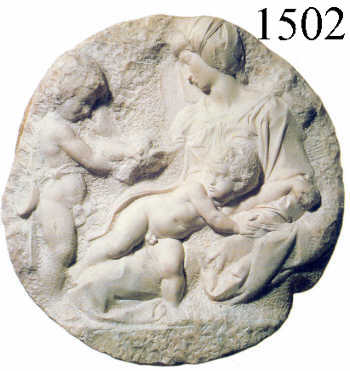 In the detail from Pacino da Buonaguida's Arbor Vitae from page 5 of Ovason's book (See above) we can clearly see that the Angel is appearing to Mary in the left of the diptych announcing her conceiving a child by the Holy Spirit. One sees the Jesus infant represented as entering from Heaven from the upper left of the circle representing the Earth. Under Mary's chin, however, is another baby shown that is already born. Why did Pacino in 1503 add a second Jesus baby? Was he able to see the reality of the two Jesus children? If so, this was his way of communicating that insight to future generations.

Around the same time (c. 1500) Michelangelo began a painting which portrayed the two Jesus children, using the animal fur on one of them in order to escape the censure of his time (See above). The cover of Ovason's book features Da Vinci's "Virgin of the Rocks" and clearly portrays two Jesus children of approximately the same age. In some versions of this painting, a long cross and fur has been added to the child at the left of painting to symbolize John the Baptist.(See above right corner of this review for Da Vinci original and at right is the detail of the modified copy.) 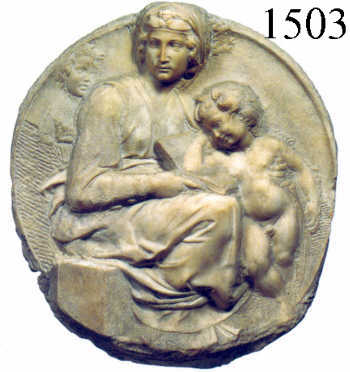 This next drawing is of the Cologne Cathedral Altar panel showing both the return from Egypt on the left of the diptych and Jesus in the Temple on the right. Note the difference in the haloes of the two Jesus children. The one in the Temple clearly has the more prominently decorated halo representing a higher spiritual being. The Solomon Jesus who returned from Egypt was to die at a young age shortly after the Nathaniel Jesus did his teaching in the Temple. In one cathedral panel, the difference in the two Jesus boys is clearly shown in their haloes. (From Page 154)

In the Two Children in the Temple by Borgognone, the difference between the two Jesus children is more revealing. Note that the one in chair teaching the assembled priests is looking at the one who is walking away. The one in the chair is healthy and the other one seems ill, depleted of energy. This would be consonant with Steiner's insight that the Solomon Jesus boy became weak and died shortly after the Zarathustra Ego which had infused his being since birth migrated over to the Nathaniel Jesus and led to his teaching in the Temple.

When Joseph and Mary found Jesus teaching in the Temple, he answers them saying, "How is it that you sought me? Did you not know that I must be about my Father's business?" Clearly, as Ovason says, "the events in the Temple marked irrevocably the dividing line between the Child he had been, and the Man he had to be."

[page 167] Steiner's account of the events in the Temple supports this interpretation of Jesus' first words in Luke's gospel. Steiner claims that during the three days he spent in the Temple (as had been pre-arranged and pre-ordained) the mature, higher spirit of the Solomon Jesus left his body and passed into the body of the Nathan Jesus. The immediate consequence of this 'injection of spirit' was that the Nathan Jesus appeared as one transformed. This transformation was not just spiritual, for it penetrated even into the physical body of Jesus.
Here is one reason why his parents, having found him after their three days of separation, did not understand what he was saying to them. Literally, a new personality was speaking to them from the changed body of their son. It is the change that took place in the Nathan Jesus during the three days in the Temple that leads us to refer to him with a new designation — after the Temple-event he is to be known as 'Jesus of Nazareth'. 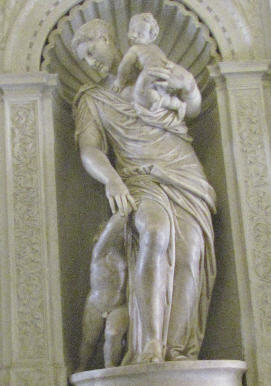 [page 412] In pointing to the importance of Christ as the pivot of the faith, I am far from denigrating either Jesus or the Two Children. No committed Christian could. The Nathan Jesus, who had been prepared, through long generations, to bear the influx of the spirit of Christ, was certainly no minor figure. On the contrary, we may have no doubt that he was an exceedingly advanced individual, fully aware of his unique destiny. Given our knowledge of the ancient Mystery lore, we must presume that the Nathan Jesus was an initiate of very high standing — as was his youthful colleague and companion, the Solomon Jesus. However, the significance of the Two in relation to the central mystery of Christianity should not be overemphasized to a point where they become more important than Christ.
Stripped of all its arcane literature, and divorced from the rich heritage of art to which the Two Children have given rise, the story we have just examined seems reasonable. It is reasonable that, for a God to descend into a living human body, a supporting power would have to descend from the heavens much like a falling star. It is reasonable that, for a perfect earthly body to be prepared as a temporary housing for this God, whole generations should have been involved in its making. It is reasonable that, in the final phase of this operation, when the long awaited Messiah was poised to descend into flesh, the two perfections of Stars and Earth should combine their wisdom and their power. In such a , way, human flesh was quickened by a stellar light, to become a worthy receptacle for a God who died, and was resurrected, and who promised to stay with humanity until the end of time.

Footnote 1. How obscure the tradition is can be seen from how academics omit any reference to it, which is unfortunate because, without it, they lack any explanatory basis for “some important differences among the four Gospels,” as Professor Elizabeth Vandiver details in her outline in the Course Guidebook to a Teaching Co. lecture on Literature of the Classical World. In reality it is in ignoring the two Jesus children tradition which has led to the conflation of the two Gospel accounts in Matthew and Luke.

A. Christians tend to conflate the Gospel narratives into one version.
1. For instance, Matthew mentions the visit of the Magi to the infant Christ; he says nothing about shepherds.
2. Luke recounts the shepherds' visit but doesn't mention the Magi.
3. Christmas pageants and creches show both Magi and shepherds.

B. Such differences may depend in part on each evangelist's emphasis and assumed audience.
1. Matthew, who emphasizes Jesus's role as the Jewish Messiah, is especially concerned to stress Jesus's royal heritage.
2. Luke, who may have been a Gentile, is more concerned with Jesus as universal savior and puts emphasis on the poor and the outcast.

See also this review of The Mystery of the Two Jesus Children Bernard Nesfield-Cookson.