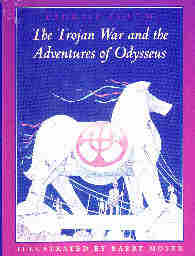 The Trojan War and the Adventures of Odysseus
by
Padraic Colum

Published by William Morrow, NY in 1997
A Book Review by Bobby Matherne ©2002


I bought this book to give to one of my grandchildren, but also with a thought that I might read it. Why am I re-reading the Iliad and the Odyssey? Well, that's not a well-formed question - you see, this is the first time I've read the stories of the Trojan War and the wanderings of Odysseus, even though the names and events are so well known to me. As familiar as the first half dozen names or so I encountered in the book: Telemachus, Odysseus, Andromache, Penelope, Hector, Laertes, Agamemnon, Paris, Achilles. What was fascinating to me was to read the unfolding tale from beginning to end for the first time - to actually put Achilles, Odysseus, Hector, and Telemachus together and see their inter-relationships as they develop. Colum has done a masterful job of merging the two tales and maintaining the page-turning drama that pulls the reader through the book to the very last page. Something neither the Iliad nor the Odyssey in their more classical form could do for me.

The image of the faithful wife Penelope waiting over twenty years for her husband to return, the sight of Achilles charging into battle with his golden armor appearing as a shooting star racing across the battlefield, of Scylla grabbing one of Odysseus's men in each of its six heads for an afternoon snack, of Charybdis swallowing Odysseus's raft and spitting it out again, of Odysseus's blinding of the Cyclops Polyphemus, of Odysseus disguised as a poor beggar pulling back the great bow and sending an arrow flying through the holes in twelve axe-handles lined up in a row - these and many more striking images arise from these pages, conjuring up the voice of the blind poet Homer crooning, like an ancient Ray Charles, dark shades and all — moaning tales of love, heroism, and woe to the notes of his lyre for the gathered multitudes across the ages of time.

Who was Helen and how did she come to be in Troy? Who led the thousand ships that were launched because of her beauty? Whose wife was she or was she married? Who made the golden armor that Achilles wore into his last battle? Who designed the Trojan Horse? Whose arrow did Achilles in? Once you've read the story all the way through, you will know these details and will never forget them.

This book is going into my library and I have a new quest — to find a couple of copies of this fine book by Padriac Colum to give to my grandchildren for Christmas. Someday they will want to read these stories for themselves.