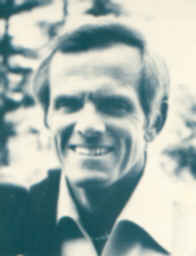 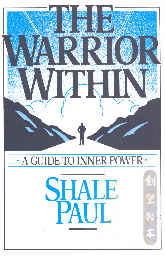 A READER'S JOURNAL
The Warrior Within by
Shale Paul

Published by Delta Group Press in 1983
A Book Review by Bobby Matherne, ©1987

A good book, but my taste for Delta Group books was soured by their spelling "beneficent" as "benificent" on the first page of the Foreword by John C. Crystal. John gives the theme of the book as follows:

Look around you. The world seems populated by nasty, aggressive people. Yet we all know some gentle giants too, powerful people at peace with the world because they are at peace with themselves. A state to be envied. The Warrior Within lights the path toward such powerful peace, for all with the courage to seek it.

Since John Crystal is given as Shale Paul's mentor, the fact that John says "A state to be envied" above indicates that perhaps he is not fully at peace. Of course he could be talking of "other" people — we all know that is possible, right? But is it really possible to talk but of ourselves? Can peace and envy exist at the same time in one person? Can you learn complete peace from someone who does not have it?

Paul writes compellingly of his journey down the Grand Canyon and the valley he discovered. The canyon trip and valley changed his life in subtle ways till he finally found himself dropping out of the hectic pace of the entrepreneur and into the more placid peace of the intra-peneur. He developed "the warrior spirit within, that fierce indwelling force that puts self-knowledge above all else and regards life itself as a laboratory for self-discovery." His journey culminated in his self-discovery which led him to say, "I do what I want to do all the time."

He shares his Karate Kid stories and the basic techniques of Aikido. One interesting anecdote is about Gustav Fechner with his lopsided frame with a straight rod inside. The vertical rod seemed to lean because of the bent frame. Some of Fechner's friends would not be fooled and saw the rod as straight. He called them "field independent" people. As we discover, there was a time when Paul was not "field independent" and in his opinions on the chemical nature of certain physical illnesses, he remains skewed.