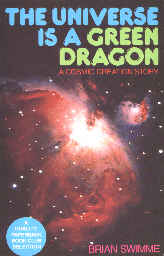 The Universe is a Green Dragon

The universe is a green dragon, as in numinous and fire-breathing. We each breathe the primordial fire of the Big-Ban fireball as Swimme leads us to understand.

His view of life is presented as a dialogue with a younger person who asks the big questions and then is awed by the answers. We should all have younger people around us like that. The awe is appropriate for Swimme's exposition of the evolution of the universe is awe-inspiring in its depth and breath-taking-ness.

Watching the moon causes the electrons of your body to be excited by the moon- photons and thus cases you to become a different person, a moon-person. The basic energy that drives nerve impulses through your body derives from the collapsing fires of the primordial explosion which generated the suns and galaxies. Speaking to someone a sentence such as the previous one requires 10 billion years of preparation to evolve the writing materials, the human being and the thoughts that led to the sentence. Every action by us is an action of the earth in Swimme's view and a chance to use the resources kept waiting for us to use for the further development of the universe we find ourselves in.

Swimme gets grandiose when he envisions the 10,000,000 species voting on whether to allow human beings to survive. Rather than making his point (how destructive humans seem to be), I believe he makes a good case for the "reverse efficacy" of democracy. During the evolution of life, each emerging species was completely outnumbered by the previous species, which usually served as its major source of food and thus made possible its emergence in the first place. Therefore every new species would have been outvoted by its "food." Who out there reading these words would suggest that their "food" be given the vote?

On the whole, an enlightening and engrossing book - well-suited for giving to adolescents of all ages to enliven the bleak boredom of their imitation-filled lives. Here's an example of how Swimme manages to achieve such an incredible feat:

[page 171] . . . the universe is a green dragon. Green, because the whole universe is alive, an embryogenesis beginning with the cosmic egg of the primeval fireball and culminating in the present emergent reality. And a dragon, too, nothing less. Dragons are mystical, powerful, emerging out of mystery, disappearing in mystery, fierce, benign, known to teach humans the deepest reaches of wisdom. And dragons are filled with fire. Though there are no dragons, we are dragon fire. We are the creative, scintillating, searing, healing flame of the awesome and enchanting universe. 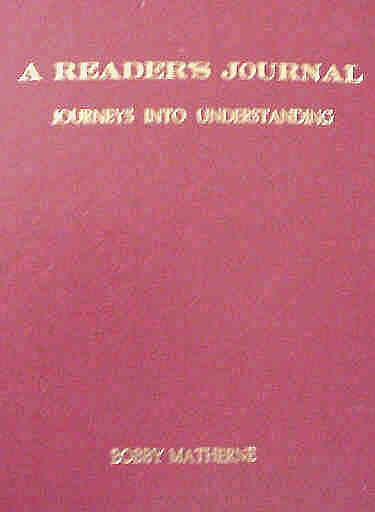 Did you Enjoy this Review?
Subscribe to our Good Mountain Press Monthly Digest now.
To Return Here from that page, Click your BACK button when Ready.
For a Sample of a Recent Digest on-line. Click Here

Do you feel like you're bored with life? Has life lost its zest for you? Are you fearful? Angry? Anxious? Feel down or upset by everyday occurrences? Plagued by chronic discomforts like migraines or tension-type headaches? Want to remove all those "stopper doyles" and free your energy, individuality, and zest for life? At Last! Discover and apply for yourself this amazingly simple 21st Century approach to removing unwanted physical body states without surgery, drugs, or psychotherapy, e-mediatelytm!