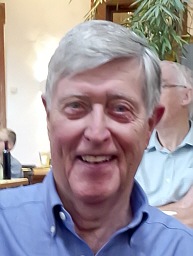 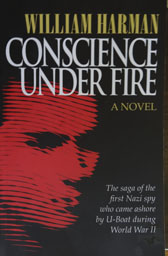 Conscience Under Fire
A Novel

Have you ever imagined what it would be like to be a teenager growing up in 1930s Germany? Kurt Hofbauer was beginning high school around 1938 when his parents Max and Greta decided to abandon their bakery in Bavaria and move to the United States to escape the ravages of Hitler's regime which were already beginning. After the Jewish shop owner across the street from their bakery was scooped away in the middle of the night by Hitler's police, the Hofbauers began making plans in earnest to relocate near Greta's cousin Georg in New Jersey.

[page 16] Max turned his head to Greta. "One more thought, Liebchen. You have a cousin living in America. Maybe you should write to him about our coming there. He could help us find a place for a bakery. He lives in a large city, doesn't he?"
"Do you really want to leave your beloved Bavaria?"
"Do I want to leave? No. Should we leave? That is the big question. I think of the possibilities. In America finding work may be difficult, but we would be safe. In Germany, we have work already. We continue with our little bakery business. But are we safe? I think not. Therefore, I say we should leave. Is it not better to struggle and be safe than to take the easy road and live in danger?"
"All right. Max. I will write to Georg. I worry about my two men, two very different good men. Meanwhile, you must let Kurt do what he wants to do. If it means joining the Hitler Youth, then let him. We don't want to raise suspicions. With luck, maybe we can be gone soon."
" Now we will begin to think about our escape to a new and better life," said Max. "Sleep well, Liebchen."
"After this conversation, you want me to sleep? I will try, my dear Max."

Georg found them a place for a bakery with ovens already installed, just a matter of modifying them from pizza ovens to bakery ovens with some sprinklers to add moisture(1) during baking.

By the time they were to leave, Kurt was already enrolled in the Hitler Youth Organization with all his friends, and didn't take kindly to being uprooted and placed in a foreign country. Max promised Kurt that he could return to attend the University of Munich after he completed high school. But would they be allowed to leave the country? They were not allowed to take any money, but Max asked Greta to sew up his stash of gold coins into the material in which he wrapped his collection of knives and bakery tools, so the extra weight would not be noticed by customs agents.

Kurt had taken enough English in Bavaria to get by in his new American high school, but he had a big disagreement with his history teacher Miss Morrison when she questioned some of the actions of Germany. His girl friend Madeline and her friends tried to help Kurt understand that the teacher was showing them how to analyze situations and understand them, and not trying to put down Kurt's native country in any way. This was a quantum jump in learning for Kurt and soon history became his favorite subject. This new way of thinking will become life-saving for Kurt in very short order.

[pag 68, 69] One of his male friends from Madeline's crowds went over to Kurt after class and said to him, "You know Kurt, Miss Morrison was not picking on you. She does that to everybody. She feeds on the give-and-take. She told my parents one time that her class is like the theater and the entire class is on stage. That way no one goes to sleep, everyone is involved, and everyone learns. So don't take what she did personally."
"For many years I was taught one way and I believed in what I was taught. This is so different, it is hard for me to understand."
Yet, Kurt's confusion is not how it ended. He had no idea about the effect Miss Morrison's approach to learning would have on him. It continued to affect him, even more so later. He had never been subjected to thinking critically and rationally. She angered him when she discussed German events, but he did begin to question his firmly held beliefs. When other topics were brought up, he found that he enjoyed the mental gymnastics, finding again that life was not all black and white but filled with infinite shades of gray. By the end of the term, modern European history had become Kurt's favorite subject. Kurt and Miss Morrison had entered into a "treaty" — "mutually assented to, its terms without coercion or duress."

When he returned to Germany he got a warm, but unsettling reception. "Welcome back to Germany, to the Third Reich, Herr Hofbauer . . . we are glad to have you back home. Perhaps the authorities will be in touch with you about your experiences in America." (Page 94)

As he headed to the university in Munich, he began to notice that Germany had begun to look like one large army camp, with so many people in uniforms. Soon events unfolded, his companion spy had gotten sick, and Kurt was forced to go it alone, to aboard a Germany submarine, an Untersee or U-Boat heading for the West Coast of Florida where he would be assigned to transmitting information on convoys leaving New York harbor. This job as a spy could get Kurt summarily executed if he were caught. He would be back in a country, the USA, where his parents live, where he has friends from high school, and he would arrive back with no possibility of contacting any of his friends or relatives, only his Germany handlers who are also spies.

He must walk alone onto a isolated island beach with his shortwave radio, wearing a Germany army uniform (in case he's caught, he would become a POW, not executed as a spy), change into civilian clothes, destroy the uniform, meet his handler, and get himself settled into an isolated cabin near New York harbor where his work would begin. He must get used to his new name, Konrad Eichler, a new personal history as an Austrian with a passport and visa.

His job was perilous: It was now 1942 and the USA had entered the war declared on it by Hitler. Tensions were high. FBI Director Hoover had his men on alert for German spies everywhere along the east coast.

Kurt got quickly settled into a place on the Jersey shore near New York City and was becoming restless waiting for something to happen, for his instructions to come in.

[page 174, 175] He needed to be active, although he sensed that his heart was not really into his mission, now that he had arrived. It was one thing to have been in Nazi Germany in comfortable surroundings with good friends and to have experienced the pulse of a mighty nation filled with pride and determination and a desperate desire to erase once and for all the shame of Versailles. It was something else entirely to be back in America where great openness and personal freedom and an uplifting spirit were evident everywhere among people who were terribly angry about what had been thrust upon them by Germans and Japanese. America had not attacked either nation; America's declaration of war was a response. And now that response was truly monumental, and in time could probably prove to be catastrophic for his native land. America was a huge country with vast resources, protected by two oceans, with nothing to stop the building of every type of weapon of war. The thought was frightening, as Kurt prepared tor another night of sleep, wondering whether his churning mind would deny him the sleep he needed.

Kurt now faces the most perilous time of his life. As his determination to be a German spy wavers, he must now come up with some way to extract himself from his German handlers and the FBI. Hoover's agents are closing in on him, they have his photo, and they are interviewing every landlord with small cottages to rent — showing them Kurt's photo. How can he escape the web he has entrapped himself in, with spiders closing in on him from every direction? If he gives himself up, he will likely be executed as a spy, a traitor to his adopted country; if he goes back to Germany, a similar fate awaits him. He is a man without a country, without friends, with limited resources, and a limited time to make a decision, the right decision, any decision, because making no decision is not a viable option.

Eight Nazi saboteurs who landed by U-Boat at Amagansett Beach, Long Island, and Ponte Vedra Beach, Florida have been captured. Their mission was to blow up war production plants, bridges, railroads and shipping terminals. (prefatory quote in book)

Was Kurt one of those captured spies, or did he escape the FBI dragnet for him? What was Kurt's fate? Did he die as a spy named Konrad Eichler or find a way to live as an American named Kurt Hofbauer? His decision awaits your reading, Dear Reader.

Footnote 1. Recently I discovered the secret of New Orleans' light and crispy French Bread used for the city's signature Po-Boy sandwiches. The bakers of these delicious loaves still today use those sprinklers inside of their baking ovens, undoubtedly a technology brought over by German immigrants to New Orleans.