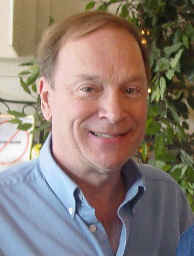 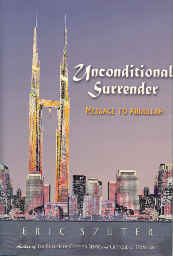 This novel asks many questions of the reader. Most immediately, what is the meaning of the cover art which portrays a large double-towered skyscraper similar to the Petronas Towers in Kuala Lumpur, Malaysia? The building seems to be sited where the World Trade Center was located in New York City. The title and subtitle also pose several more questions, "Who is surrendering to whom?" "What is the message to Abdullah?" and "Who is Abdullah?" As we turn over the book and inspect the book jacket, we might add these two questions: “Does this book pick up where Atlas Shrugged left off?” — as Raymond Bergeron there suggests, and “Is this book our launching pad to the future?” as Robert Ramsey avers. These are enough questions to cause any readers with a soupçon of curiosity to open the book for a read, and they will not be disappointed. All these questions will be answered in the course of this novel.

It's been almost fifty years since the publication of Atlas Shrugged changed the way many Americans thought about capitalism. One may find it hard to imagine the Reagan revolution in the 1980s without the influence of Ayn Rand's masterwork on the way Americans thought about capitalism. Her hero John Galt was known for his famous emblem, the sign of the dollar, which is formed by combining the U and the S of the United States. Similarly we can notice the U and the S of the words of the main title "Unconditional Surrender." The hint from Bergeron that this book picks up where Atlas Shrugged left off is tantalizing because no other novels, to my knowledge, have made this claim in half a century, up until now.

The hero of this book is Abdullah, a lowly bricklayer in Najaf, Iraq in the present time. His country is striving to assemble a new form of government, and Abdullah is a thinker. He wants the Israelis pushed out to the sea and off the lands of the Middle East. In fact, he writes a paper about moving the Israelis to a new homeland in the Sonora desert in Mexico. He also believes that the events of September 11th were justified. He is as unlikely a successor to John Galt as one might ever find. What kinds of forces or revelations could turn Abdullah into a John Galt for the new generation, could turn Iraq into a twenty-first century version of the eighteenth century United States of America, could allow Iraq go the USA one better, and could even set a new standard for the governments of the world to follow?

These are the issues this book addresses face on. The author brings to the fore the teachings of Socrates, Immanuel Kant, Ludwig Wittgenstein, Ayn Rand, Thomas Paine, and Thomas Jefferson, not by multiple page-long monologues as Ayn Rand does in Atlas Shrugged, but by the personal appearance by these thinkers, who coach Abdullah in each's individual philosophy. Gradually an image of how Abdullah can lead his beloved people into peace and prosperity.

Will Abdullah have the common sense that Thomas Paine possessed when the American colonists were attempting to form a new government? Will Abdullah bring the Arabs to a new glory to exceed the glory of the ancient Arab world who invented the arabic number system and had exquisitely beautiful palaces when most mediaeval Europeans were living in mud hovels? Is there something that Thomas Paine would like to have done differently which he could share with Abdullah? Can Iraq become the new United States and surpass the USA in productivity, prosperity, and freedom?

If you have a copy of this book, the answers to these questions are in your hands. Read on.