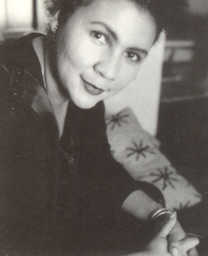 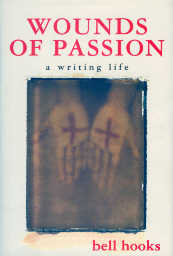 Wounds of Passion Ś A Writing Life
by
bell hooks

This book is by a fine writer who is also a black feminist, bell hooks. Her first book took as its title the famous phrase of emancipated slave Sojourner Truth that echoed through the halls during the 1851 Women's Rights Convention in Akron, Ohio, "Ain't I A Woman?" In "Wounds of Passion" she recounts recollections of her life and struggles to find a voice as a writer.

When one has traumatic memories, it can hurt to recall them, especially if one recalls them as they originally happened in the first person or associated state. To recount or relive unpleasant events, one does better to access those memories in a dissociated state or what writer's refer to as third person. The lack of attention to this human process by investigating officers during questioning after a rape can cause immense distress to the victim. The author, bell hooks, has occasion to recount many distressful memories in this book about her writing life, and evolved a style of writing about those particular memories in the third person in her memoir Bone Black. (Her pen name is "bell hooks" and always appear un-capitalized. She took the name from her mama's mama's mama, Bell Blair Hooks, whom people always told her she closely resembled.) In the Preface she describes how she uses this writing style to advertise rather than disguise her process in her writing.

[page xxii] The inclusion of the third person narrator who has both critical insight and an almost psychoanalytical power that enables critical reflection on events described is an act of mediation. When we rewrite the past, looking back with our current understanding, a mediation is always taking place. I give that mediation a voice rather than mask this aspect of any retrospective reflection on our lives.

Here's a sample from the first paragraph, in italics:

[page 3] Growing up, poetry had been the sanctuary, that space in words where longing could be spoke. Nobody in her world understood. Poems came in another language. Nobody could find or hurt you there. . . . Poems were the way to leave pain behind Ś to forget. They were a kind of suicide, a death. Her real self could drown in them. They were water to her thirst, cooling the burning sensation, soothing the red welts on her skin left by the lashes from fresh young branches still green. Poetry made childhood bearable.

This book does not proceed chronologically, but thematically. It is like a tapestry woven of the rough and smooth textures of her life, a patchwork more than a seamless quilt. Her aunts loved to do jigsaw puzzles, but she never liked to work on them, although she says "completed puzzles awed me." Wounds of Passion proceeds like she tells us her childhood memories come to her.

[page 17] I do not remember the big picture of childhood, everything comes to me in small broken fragments. Even when I piece things together, the pieces never make a whole fragment. There is never a complete picture.

Wounds are like that. Scattered over one's body. There's the scar from the wound inside my ankle from my first two-wheel bicycle when I was four. There's a line halfway up my left forearm from when a glass desktop cleaved in two as I was moving it and a guillotine-sized shard grazed my wrist twenty-three years ago. These scars over time move away from the extremities towards one's center, towards one's heart, don't they? Those scars on my body have explanations, but many of the scars for bell hooks came from things without explanation.

[page 19, 20] Her heart broke not because things were taken away. They disappeared; that was different. It wasn't just an issue of loss. It was the pain of having something you love disappear without explanation. It was not knowing what had happened that hurt so. She was in such pain that it blinded her. She never saw what was right before her eyes. She never told lies. So she could never see the lies they told her.

Telling the truth as a black woman was not a safe thing to do when she began writing, but her daring approach to living and writing has helped make it safe in the intervening years. Her companion and live-in friend Mack was black and male, and her interactions with him provide much of the texture of this book. He didn't see her as a poet as he saw himself.

[page 115] He thinks of her a naive artist, someone painting from intuition Ś someone who has the feel for where the words can be placed, who is interested in feelings. Superior to her he is interested in the complexity of language. That's how he sees himself superior to her. She does not understand that he thinks of himself as Pygmalion, of her as his pupil Ś his little southern primitive whom he can teach about civilization, high culture, and what really matters.

Her view of small talk resonates with me.

[page 124] Small talk makes me feel the way I do when a mosquito is buzzing around my head Ś irritated Ś and then finally unable to get any relief I just slaughter the damn thing. I slaughter the moment by saying something real.

So she tells the truth in a world where that is not a safe thing, especially not in Los Angeles, about which she says, "Although we live in the City of Angels, there is no protection anywhere." (Page 161) Again and again she finds that people don't want to hear the truth.

[page 186] That's what one of them big white professors told her. He called her right on into that office and told her. Your problem is you want to tell the truth, nobody wants to hear the truth.

When she decides to leave Mack, everyone from her mother to most of her closest friends tell her it is a mistake. In her friend's voice we hear it clearly:

[page 253] You are making a mistake, good men are hard to find out there, shit you do anything you want and Mack is fine with that Ś girl you better stay your ass where you are.

When she finally leaves Mack it is like driving towards a wasteland for her and again she tells us the truth:

[page 259] On a clear bright morning I leave behind California blue sky, the bluest sky that I have ever seen. The redwoods, the sand, the ocean, all are places where bits and pieces of my heart are scattered. I am driving toward the frontier Ś moving toward desert and wasteland.

She compares herself to Christ Jesus going into the desert, which when He finally re-appeared from his private desert on the cross at Golgotha, he had the wounds of passion on His hands. In this book, we see bell hooks' wounds of passion in the words of the text, in the title of the book, and in the stigmata of the hands on the book jacket Ś and we see in the last paragraph that the spirit has touched her and left her body whole.