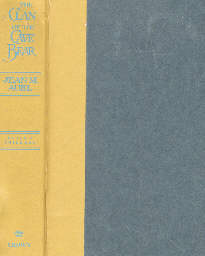 A READER'S TREASURY
Clan of the Cave Bear
by
Jean M. Auel Evolution of Consciousness
Published by Crown Publishers/NY in 1980
A Book Review by Bobby Matherne ©1999

When I read Ken Kesey's One Flew Over the Cuckoo's Nest, I swore that they couldn't make a movie out of a novel in which the main character and narrator was a mute Indian. After seeing the movie they made, I discovered that I was right! They made a movie about a different character who could talk. Jack Nicholson played that part and stole all the scenes. The Indian had only one good scene at the end of the movie. A good movie, but not the story in the book. Years later as I read this Auel book in which the entire cast of characters mostly grunted and gestured, I figured a similar fate lay in store for any attempts to make a movie of Clan of the Cave Bear. Actually they did a better job of bringing this story to the screen accurately. But so much had to be left out, that anyone who settled for only the movie missed a lot of good stuff.

This is a story about the evolution of consciousness in Northern Europe during the period between the Ice Ages. Ayla was a mutant, an advanced member of the human race. Abandoned at birth by her parents who were killed by an earthquake, she was nearly eaten by a Cave Lion and was later adopted by non-mutants, the grunters, who raised her as their own. As best as they could, given that she had capabilities "far in advance of mortal men," as a part of the radio script for Superman went. She wasn't able to "leap tall buildings at a single bound" since there were no tall buildings extant at the time, but she was able accurately throw a rock with a slingshot, a skill that meant the difference between life and death at the time. She could do it far better than the men could, which endangered her life because hunting with a slingshot was a feat that women were not allowed to do — hunting was the sole province of men of the Clan of the Cave Bear. Was she admired and respected for this skill? No, rather she was exorcized from the clan. Not only kicked out, but everyone treated her as if she were invisible, as if she were already dead. And for an ordinary woman of the Clan, she would be good as dead for she could not survive without a man to hunt for her food. Plus Ayla had just given birth to a baby. Plus it was winter in Northern Europe.

As we look back on Ayla's predicament today, we realize that she was a Cro-Magnon woman raised by a family of Neanderthals. Her larger neocortex provided her with ideo-motor skills that far exceeded those of her adopted tribe. Her extra brain capacity allowed her to have detailed cognitive memories, to speak in clear syllables instead of grunts. Was she respected and prized for her advanced skills? No, in the custom of humanity, she was treated as a retard and ostracized for rebelling against the customs of the tribe, traditions that didn't make any sense for someone with her advanced capabilities. So they kicked her and her baby out, condemned them to death by starvation and freezing. But Ayla was able to survive and thrive, and it's a good thing she did, because there were going to be several more books written about her adventures, see the latest series list below.

1. The Clan of the Cave Bear
2. The Valley of the Horses
3. The Mammoth Hunters
4. Plains of Passage
5. The Shelters of Stone
6. The Painted Caves