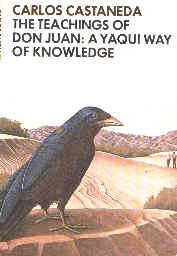 The Teachings of don Juan

In his Foreword Walter Goldschmidt writes:

[page 9] This book is both ethnography and allegory. Carlos Castaneda, under the tutelage of don Juan, takes us through that moment of twilight, through that crack in the universe between daylight and dark into a world not merely other than our own, but of an entirely different order of reality.

What Carlos did with this first don Juan book was to crack open the oyster of his anthropological maps and glimpse the living world within and beyond those maps. Carlos learned his anthropology by listening to professors talk and by his own thinking. His new professor, the Yaqui sorcerer, Juan Matus, had a subject to teach Carlos that required more than talk, more than thinking. It required a complete shattering of Carlos' most cherished beliefs and unconscious assumptions about the world that were contained hidden away in those maps. Using the available native pharmaceuticals of peyote, datura, and mushrooms, Don Juan shredded Carlos's maps and allowed him to explore the world with the beginner's mind.

At the conclusion of this first book, Carlos includes a 71 page "Structural Analysis" of his experiences with don Juan

(1) — the anthropologist part of Carlos got in the last word. Since such an analysis never appeared again in the rest of his don Juan books, one can assume, this was the parting shot of the anthropologist part of Carlos Castaneda. He had found the "path with heart" that existed outside of his book learning, a separate reality, and was never again to look back. Here's a summary of the structural analysis that the author gives in his Introduction:

[page 27] Through my analysis I seek to support the following contentions: (1) don Juan presented his teachings as a system of logical thought; (2) the system made sense only if examined in the light of its structural units; and (3) the system was devised to guide an apprentice to a level of conceptualization which explained the order of the phenomena he had experienced.

An example of don Juan's teaching method comes in Chapter 3 when he tells Carlos that a man of knowledge has four natural enemies. The first one is fear, and after overcoming fear, man reaches a clarity of thinking and that clarity is the second enemy. Once he overcomes his clarity, he receives power and that is another enemy to be overcome. To be defeated is to be through. The fourth enemy is a surprise enemy that any one of us will someday face if we live long enough.

[page 98, 99] "The man will be, by then, at the end of his journey of learning, and almost without warning he will come upon the last of his enemies: Old Age! This enemy is the cruelest of all, the one he won't be able to defeat completely, but only fight away.
"This is the time when a man has no more fears, no more impatient clarity of mind — a time when all his power is in check, but also the time when he has an unyielding desire to rest. If he gives in totally to his desire to lie down and forget, if he soothes himself in tiredness, he will have lost his last round, and his enemy will cut him down into a feeble old creature. His desire to retreat will overrule all his clarity, his power, and his knowledge.
"But if the man sloughs off his tiredness, and lives his fate through, he can then be called a man of knowledge, if only for the brief moment when he succeeds in fighting off his last, invincible enemy. That moment of clarity, power, and knowledge is enough."

One of the big questions that troubles Carlos in this book is finding a "path with heart." He asks don Juan how to know when a path has heart, and don Juan tells him simply, "Before you embark on it you ask the question: Does this path have heart? If the answer is no, you will know it, and then you must choose another path." Well, that seems to activate Carlos's fears that he might lie to himself. "Why would you lie?" don Juan asks him.

[page 183] "Perhaps because at the moment the path is pleasant and enjoyable."
"That is nonsense. A path without a heart is never enjoyable. You have to work hard even to take it. On the other hand, a path with heart is easy; it does not make you work at liking it."

Another way of talking about one's maps is to call it a consensus reality. Till his experiences with don Juan outlined in this book, it is likely that Carlos had never been aware of his consensus reality. The last event Carlos describes in the book is an episode of intense fear after which Carlos said that he would resist the first enemy of a man of knowledge, fear. Here is Carlos's own words, the last words of Appendix A.

[page 283] From my own point of view, however, that last special state was the final summation of my apprenticeship. The formidable impact of terror on the level of sober consciousness had the peculiar quality of undermining the certainty that I, in matters of ordinary reality, could provide myself with consensus indefinitely. Up to that point the course of my apprenticeship seemed to have been a continuous building toward the collapse of that certainty. Don Juan used every facet of his dramatic exertion to accomplish the collapse during that last special state, a fact prompting me to believe that the complete collapse of that certainty would have removed the last barrier that kept me from accepting the existence of a separate reality : the reality of special consensus. [italics added]

Having removed this last barrier, Carlos goes on after this book to write a new book in which this idea of a separate reality is raised to the title of the book.