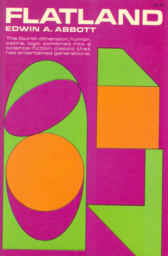 This is Abbott's classic book about the nature of Lineland, Flatland, and Spaceland. I first encountered it while in college and its concepts were mind-boggling. Abbott's imagination led me into worlds of thought about two, three, and four dimensional worlds. By describing how a society might be structured in two dimensions, he brings the reader to imagine how constrained such a world would appear to a being who lived in three dimensions as we do. In the introduction to the Second Edition in 1884, Abbott engages our imagination right away:

Suppose a person of the Fourth Dimension, condescending to visit you, were to say, "Whenever you open your eyes, you see a Plane (which is of Two Dimensions) and you infer a Solid (which is of Three); but in reality you also see (although you do not recognize) a Fourth Dimension, which is not colour nor brightness nor anything of the kind, but a true Dimension, although I cannot point to you its direction, nor can you possibly measure it." What would you say to such a visitor? Would not you have him locked up? Well, that is my fate: and it is as natural for us Flatlanders to lock up a Square for preaching the Third Dimension, as it is for you Spacelanders to lock up a Cube for preaching the Fourth.

Since all beings in Flatland present to one's view the appearance of a straight line, there must be some way of distinguishing inhabitants. One way is by feeling one or more angles of the newly met inhabitant. Even though Abbott is talking literally about contact when he uses feeling, consider how apt the following quotation is if feeling were taken in the sense commonly understood today.

[page 18] Feeling is among our Women and lower classes, the principal test of recognition, at all events between strangers, and when the question is, not as to the individual, but as to the class.

One would not be surprised that a candidate for American president who claimed to "feel your pain" would be elected by an overwhelming majority by that section of our society, and would be defended at all costs.

In the beginning of Part II Other Worlds, the author describes his vision of Lineland. He says, "It was the last day but one of the 1999th year of our era, and the first day of the Long Vacation." And, as it happened with the imminent approach of the year 2000 with all its pronouncements of doom coming from the Y2K problems in software, Abbott's words seem prophetic.

In several places he describes the difficulty that a being from a higher land such as Spaceland would have describing his land to any lower land. In the Volitional Science courses of Andrew Joseph Galambos, he uses the name Flatlanders for those people who accept the current coercive approach to societal control as defined in the Federalist Papers of James Madison and Alexander Hamilton. For those who understand that the essence of true government is voluntary action, non-coercive action, at all levels, he uses the name Spacelanders. It was Galambos's way of reminding us that when we try to share the his concepts with others we'll be presented with the same difficulty that a Square would encounter if it tried to describe the features of Spaceland to a Flatlander.

In addition to helping young thinkers to visualize worlds of higher geometrical dimensions, Abbott has created a thoughtful book that will help us all to visualize higher societal worlds.