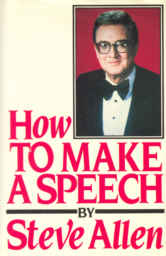 How to Make a Speech
by
Steve Allen

Chapter: Reading for Enjoyment
Published by McGraw-Hill in 1986

In the first chapter Overcoming Stage Fright, Steve gives a lesson that I had to learn the hard way. I was asked by Joseph Newman, the energy machine inventor, if I would give a speech in support of his invention at the Hilton Hotel in downtown New Orleans. I scribbled a few notes on a piece of paper and placed it in my pocket. The room was packed to overflowing with 2,000 people, and I was at the head table sitting next to Eddie Albert, the Hollywood movie star, who spoke immediately before I did. I opened my speech with these words, "Most people ask how big Joe's energy machine can be built, but I'd like to ask how small can it be built." I went on to describe a world in which every electric appliance will be without wires if the machine can be made small enough. It was a good speech, held the crowd's attention, and received warm applause. What went on inside of me during the speech was difficulty breathing, tension, dry throat, my hands trembled a bit, all the classic stage fright symptoms. This speech was videotaped, however, and I have had numerous opportunities to view the tape, and what is astounding to me is that not a single sign of all the mess that was going on inside of me was visible externally to the crowd. Somehow that has freed me from ever experiencing stage fright again — why worry about something happening if when it does happen, it has no discernable effect on your speech? Steve makes a similar point and adds:

[page 8] You would have to turn pale, pass out, and fall into the orchestra pit before anyone would remember the incident a week later.

In the chapter Writing the Speech Steve recommends an old book that is a favorite of mine since I discovered it years ago titled How To Lie With Statistics. Its stated purpose is not to teach you to be devious, Steve says.

[page 34] But the book will help clarify your own thinking about arithmetical information and percentages and will, if interpreted properly, make you more responsible in using them.

Steve recommends the use of outside authorities, but notes the pitfalls that accompany them — especially if the quotations, even though cited with the originator's name, take the place of expressing your own point clearly and concisely.

[page 37] Far better than dependence on outside authorities will be a well-reasoned argument that applies precisely to the question at issue. To construct such an argument it will be necessary for you to think.

[page 53] Give particular attention to the opening and closing. If you make it clear to your audience at the outset that you are communicating with them directly, in a personal way, they will, perhaps, not notice when you later begin to read from the text. If you finish in the same manner, with no downward glances, that will leave the same impression.

Mortimer Adler makes a similar point in his book titled How To Speak, How To Listen. He suggests that you know exactly how to open your speech, and do it with elan, looking your audience directly in the eyes. And close the same way.

There are many more chapters in this book: Rehearsing the Speech, Getting Ready, The Actual Performance, The Ad-Lib Speech, Should You Employ Humor?, Speaking in Unusual Circumstances, Accepting an Award, Summing Up the Evening's Program, and Serving as Toastmaster. Each one of them is chock full of thoughtful suggestions and appetizing tidbits to enliven and enhance your speeches.