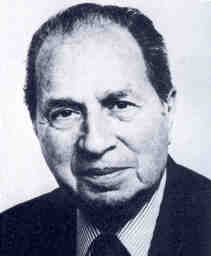 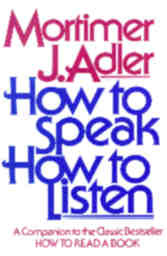 How to Speak, How to Listen
by
Mortimer Adler
Writing
Published by MacMillan/NY in 1983
A Book Review by Bobby Matherne ©2002

Forty years after finishing his classic book How to Read a Book, Adler wrote this followup book about two other aspects of communication that are often overlooked in our school systems. While our schools devote time to reading per se, the techniques of reading a book are never taught unless one is lucky enough to encounter a teacher who has read Adler's book on the subject.

Since the requirement to hold a bachelor's degree is common for teachers in our secondary schools, it might be appropriate to look at the adjective "bachelor" and its historical usage. People certainly didn't mean the same thing when they referred to unmarried males, uninitiated in the ways of marriage, as when they referred to holders of a bachelor's degree in liberal arts.

[page 7] On the contrary, it meant that they were sufficiently initiated into the world of learning to go on studying in the higher levels o the university, in the faculties of law, medicine, or theology. The B. A. degree was a certificate of initiation, a passport into the world of higher learning. It did not signify that those thus certified were learned, but only that they had become competent as learners by virtue of having acquired the skills of learning - skills in the use of language and in the use of other symbols.

Adler is precise in his use of the word "Speak" in the title - he wishes to address the process of rhetoric, both in the form of "persuasive speech" and "instructional speech." The first kind includes a sales pitch, the second kind a lecture to a classroom. Often we hear a counter to one's argument, "That's just rhetoric!" The word rhetoric, like such other good words, awful and criticism, has evolved, and rhetoric has gone from a descriptive word for good speaking into an evaluative word for high-faluting stuff and nonsense. When we say something is just rhetoric, we're calling to mind the high paid lawyer whose powers of persuasion gets the guilty defendant an innocent verdict. But for Adler, author of the concept of the Great Ideas in the Encyclopedia Britannica, rhetoric is one of those 102 Great Ideas of humankind, and thus represents one of the foundations of what it means to an educated person.

Who can forget the effect of Marc Antony's speech in Shakespeare's drama, in which the repeated calling of Brutus an "honorable man" has the exact opposite effect as the words alone might predict. Such usages of words to shape a desired response is the meat of the subject of rhetoric, rightly understood.

Both Marc Antony in his oration on Caesar's death and Dr. Andrew J. Galambos in his V50T course had a big job of persuasion on their hands. Antony had to convince the crowd that Brutus had not given them freedom, but had stolen something very precious from them. Dr. Galambos had to convince the customers for his course that ideas are not something you can freely pull out of other people's minds and words, but that ideas are in essence the primary property of humankind. How did these two great minds and orators go about their task? Pretty much as Adler says below:

[page 56] To persuade listeners to change their minds by adopting views contrary to ones they have persistently and, perhaps, obstinately held, it is necessary to undermine their prejudices in a manner that is as firm as it is gentle. Long-standing prejudices are barriers to persuasion. They must be removed before positive persuasion can begin. Removing them opens the mind and renders it receptive to views of a contrary tenor.

Another aspect of rhetoric that leads to its bad rap is when we, as speaker, talk over the heads of the members of our audience using big words and concepts, etc. Adler counters this by blatantly suggesting that we, "Always risk talking over their heads!" He adds, "It will not hurt if some of the things you say may be beyond their reach."

[page 61] The truly great books, I have repeatedly said, are the few books that are over everybody's head all of the time.

Beginning in Chapter VII With the Mind's Ear, Adler talks to us about listening. Who wants to hear that? Nobody! We've been listening since we were babies! Doesn't that make us experts in listening, of all things? Well, Gertrude Stein, as reported by Thornton Wilder, would seem to disagree:

[page 85] Everyone, when they are young, has a little bit of genius; that is, they really do listen. They can listen and talk at the same time. Then they grow a little older and many of them get tired and listen less and less. But some, a very few, continue to listen. And finally they get very old and they do not listen anymore. That is very sad; let us not talk about it.

I remember so well from How To Read A Book that Adler constantly emphasized that the reader must come to terms with the author, so it came as no surprise to find that he recommends as a key to effective listening that a listener must come to terms with the speaker. (page 91) How is that possible? I can hear my imaginary "expert listener by means of longevity" objecting. How can I possibly remember all the things that speaker is talking about? Adler gives us a hint on how to proceed.

[page 92] Not everything said or written is of equal importance. In most discourses, whether spoken or written, the number of truly important propositions being advanced is relatively small. The listener, like the reader, must detect these and highlight them in his mind, separating them from all the contextual remarks that are interstitial, transitional, or merely elaborative and amplifying.

In a curious paradox, which I note mostly for a memory aid for the definition of the word, Adler says on page 92, "If it is worth listening to its structure will be perspicuous and coherent. In the margin I wrote, "the word perspicuous, which means plain to the understanding is not perspicuous."

On page 128 I found what I call creative typography, which I define as a typographical error that adds meaning to the text in which it is found in a creative and enlightening way that the author obviously never intended. The word such was typed out as suck. Below is the creative typography that resulted, referring to a "so-called heart-to-heart talk" from the previous paragraph. It is creative typography par excellence:

[page 128] Suck talk is concerned with emotional problems of deep concern to the persons involved. It is deeply serious, probably more serious than any other kind of talk, for it aims to remove emotional misunderstandings or to alleviate, if not eliminate, emotional tensions.

One can slough off the speeches in the House and Senate in our country as just so much rhetoric, especially those made over and over during the 1999 impeachment trial of the president, but those very long-winded and repetitive "conversations" are an essential glue that holds this country together peacefully. Listen to what Adler tells us of such discussions:

[page 190] When the imperial and despotic rule of the Caesars displaced republican government, discussion ceased. The people came together only in the amphitheatre or the circus to indulge in more or less brutal pastimes, but certainly not to discuss public issues. The senators took to their homes and tried to avoid any suspicion that they might have something to say about public affairs. The republic died when discussion ceased and the Caesars, with their pretorian guards, took over the reins of government.

Perhaps a time will come again when someone is accused by the thrown epithet, "That's just rhetoric!" that we will respond with equal vigor as Professor Antonio Borgese did, "Smile when you say that!" (page 21)