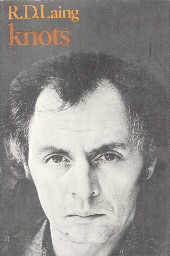 A woman's first words to a therapist was, "My mom had to get married and here I am." To the therapist who wrote these words down exactly, this brief sentence constituted a complete life history of the client, at least enough to get started on. This woman had created a knot in her life and shared it as a knot. A knot of the kind Laing has filled his book with. On the inside cover of a yellowing paperback copy of "Knots" of 1970s vintage, one I probably bought at a library sale, is the following hand written inscription:

Robin,
Once in Knots I found help, now find it enjoyable. I hope you like it. Happy B-day.
Karen

"Once in Knots" can mean, among other things: 1) When she first read Knots, she found it helpful, and now she finds it enjoyable reading. 2) At one time she was in knots, then she found help in this book and now finds her life more enjoyable. The second sentence can refer to her friend liking the book or to her friend going through the similar process that she did: of her life tied up into knots, the book helping her to see the knots and leading her subsequently to untying them so that she can enjoy her life more.

These are two examples of what Laing calls "webs of maya" in the only metacomment Laing makes on the eponymous knots that fill the rest of his book.

The patterns delineated here have not yet been classified by a Linnaeus of human bondage. They are all, perhaps, strangely, familiar. In these pages I have confined myself to laying out only some of those I actually have seen. Words that come to mind to name them are: knots, tangles, fankles, impasses, disjunctions, whirligogs, binds. I could have remained closer to the 'raw' data in which these patterns appear. I could have distilled them further towards an abstract logico-mathematical calculus. I hope they are not so schematized that one may not refer back to the very specific experiences from which they derive; yet that they are sufficiently independent of 'content', for one to divine the final formal elegance in these webs of maya.

The first knot illustrates the paradox that every therapist confronts in couples therapy. The couple have a pattern of calibrated interactions. One placates, one blames. One is a victim, one is a rescuer. One is aggressive, one is passive-aggressive. This is the only way they know life to be possible, up until now. It is their maya. They like it this way. They would like their life to change for the better while it stays the same. This is their impasse, their bind, their disjunctive conjunction(1) , their knot. The therapist must join them in their game to keep them as clients, or else they will leave therapy. In addition, the therapist must break up the game for the couple to move from a disjunctive conjunction to a copulative conjunction from now on.

Obviously a couple in such straits is not having fun. Maybe if they had a little fun they would remember the wonderful things that brought them together initially. But let the therapist try to get them to have fun and another tangle develops, which Laing delineates in the second knot:

A little girl comes along and says: let's have fun.
But having fun is a waste of time, because it doesn't
help to figure out why they're not having fun.

How dare you have fun when Christ died on the Cross
for you! Was He having fun?

After a dozen or so preparatory knots involving individuals, Laing devotes a major part of the book to knots involving a couple from the famous nursery rhyme, Jack and Jill. That short verse can be considered to be a metaphor for a married couple's life before entering therapy. For those not familiar with the rhyme or the pattern it describes, you single ones, it goes like this:

Jack and Jill went up the hill to fetch a pail of water.
Jack fell down and broke his crown and Jill came tumbling after.

Jack and Jill decided to get married. As they left the altar, they had a goal in mind. It might have been to raise a family, but metaphorically the goal could be expressed as fetching a pail of water. Along the way, one of them falls down and the other tumbles soon after. One of them begins a knot and the other gets quickly entwined. They go to the knot-un-tier, a therapist, and tell their story.

This "Jack and Jill" knot, which pervades the book, seems to go on forever, and without a competent therapist's assistance, perhaps it will. The introduction to Knot 3 is a meta-knot, if you will, a knot at the highest level of abstraction, that deals with so many aspects of life that it is worth putting on a bumper sticker, in an email signature file, on a business card, or reciting as a daily mantrum:

Usually, when we speak a sentence with a "not" in it, our human mind creates an image of the sentence's meaning by dropping the "not" out of the sentence. There is no image associated with the word "not." This was hammered home in their early seminars by Bandler and Grinder. They would tell someone in the seminar, "Joe, don't think of a pink elephant." Then later they would ask Joe, "What color was the pink elephant?" Everyone got the message. Whenever we talk, we create images from our words, but there is no image for "not." Well, there is one image that I got from Jonathan Parker: he says when you have a thought you don't want, then take the image of the thought and place circle around it with a diagonal slash across it like in the No Right Turn signs, etc. Notice how I've placed the thought of a "right turn" into your minds by my choice of example. I did it consciously. Even more effective speakers and writers than I am do their choices of examples unconsciously - they don't know they know how to do this, so they think they don't know how.

Footnote 1. A disjunctive conjunction is defined by Cassel's Concise Dictionary as: a conjunction (e.g. or, but, though) which unites sentences or clauses in composition, but divides them in sense, as opposed to a copulative conjunction. Knots, in marriage, unite two partners as a couple in composition, but separate them in the disjunctive sense, as opposed to the more enjoyable copulative sense.