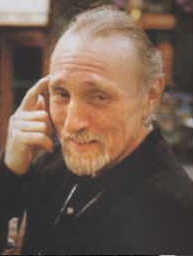 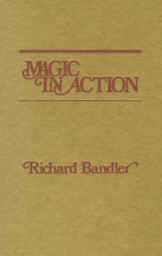 This is a book of a transcript of Richard Bandler working with several different clients. It has been transcribed from a video tape. If you’ve ever cooked a complicated dish, you know how important every aspect of your senses are during the preparation of the dish. Your feeling for the temperature of the food in the pot at each stage of cooking, the smells that come out of the pot during each stage, the texture of the food as it cooks down, the sound of the onions as they sauté, the color and the translucency of the onions as they cook, the taste of the dish as it nears completion – attending to all these in their exquisite detail makes the difference between a great-tasting dish or a flop. Now look at the recipe for the same dish: all black and white on paper, quantities, and instructions. No matter how complicated the instructions, the proof is in the cooking. Reading this book of Bandler doing therapy is like reading those complicated instructions. The tone, timbre, rhythm, inflection, and quality of his voice are all flattened out, so most if not all of his tonal anchors are not available to the reader. (These are usually missed anyway by others, as Bandler has pointed out on many occasions.) What the client is doing while Bandler is speaking is completely deleted because only the words of the person speaking is transcribed.

Given all these limitations, it’s a wonder why anyone would try to transcribe Bandler’s work at all. Or buy the book of such a transcription. I wonder why I did it some sixteen years ago myself. Maybe I didn’t understand then the things I’m describing to you now, dear reader. So don’t expect this to be a “Gee, you’re wonderful, Mr. Bandler.” homage thing. Instead I’ll try to cook up a few interesting side dishes to accompany your reading of the main course, the book, just in case, in spite of my suggestions to the contrary, you decide to read it, instead of view the video tape or better yet, schedule a live seminar with Bandler.

As I wrote in the margin of page 21 on August 24, 1985, “I don’t consider myself a therapist, but an entertainer of options.” You might wish to do the same, if you have enough options; if not, get some more. About eight pages later I wrote, “In the mirror I see the reflection of all my thoughts.” Put the book down and go look at the reflection of all your thoughts in the mirror. It’s what other people see all the time anyway, you might as well look for yourself.

In the book, Bandler deals with the following topics in seven chapters: Anticipatory Loss, Agoraphobia, Fear of Authority Figures, Worms, Chocolate, Beyond Beliefs I&II. The best advice I ever heard Bandler give about anticipatory loss was when he said, “You have to plan ahead to be disappointed.” People who are disappointed by life have a process for preparing themselves in a way that results in feeling what they call disappointment later. Break that process and their disappointment never arises. I knew a therapist who used to tell me, “I don’t fix people, I break them.” What he meant was that people have processes that work well to create unwanted things all the time; he saw his job as identifying those processes and breaking them so that the person has more time and energy to spend doing wanted things.

Agoraphobics are like oysters: they want to stay in their shells all the time, however they define their shell. In the case of Bandler’s client, he wanted to stay within the city: that was his oyster. Why do I say they are like oysters? Have you ever eaten a live oyster? Don’t know? Well, the answer is no, because the oyster dies when the large muscle that holds the shell closed is cut during the opening of the oyster. How do you know if oyster was alive before you opened it? Easy, your nose will tell you very quickly; besides the shell will already be open with no muscle to hold it shut.

Yes, agoraphobics are like oysters: their life depends on their holding their shells shut, and the therapist is like the oyster man with his blade-opener. The harder he presses his blade between the crack in the shells to separate the two shells, the harder the oyster bears down with its muscle. Finally the shells are parted, the muscle separated and the oyster is ready to eat. The agoraphobic thinks he will die if he leaves the shell of his city, and he holds with all his might against the blade of the therapist who open him up to entertaining other options. To open up an agoraphobic is as difficult as opening an oyster, with the added challenge of keeping the agoraphobic alive, because after all, it is living that frightens the agoraphobic, rightly understood.

In dealing with authority figures, Bandler is at his playful best. I will put the strongest tonal anchor in italics in the passage below, something the transcribers for the book didn’t think was necessary. There are eleven more tonal anchors in this short sequence, as you can find by inspection.

[page 83] Close your eyes. Begin to run through different times and places and memories. Between each one go back to the one that gave you this feeling. Exhilarated plus. That’s right. Keep this with you. Should take that everywhere you go. makes your skin glow pretty. You’ve got some playful parts in there. I can see. They sneak out when you drink don’t they?

In dealing with Anita with her phobia of worms, Bandler spends a lot of time illustrating how to evoke phobias in order to cure them. He talks about the snake episode in Raiders of the Lost Ark when Indiana Jones looks down and says, “It had to be snakes!” and Bandler says for her it “had to be worms.” All the while he’s talking about snakes, she’s thinking worms. “Attack of the Killer Worms.” He’s getting Anita to entertain the option of laughing when she thinks of worms instead of cringing as she’s done every time, up until now.

Humor is an essential part of Bandler’s work and one of the benefits of having his live work flattened out in a book is that when you’re in a session with him, you tend to go from one laugh to another and ignore the essential nature of the therapeutic move contained in the item that created the laugh. Here’s a test – see if you can spot the laugh line in the following passage from the Chocolate chapter. [I’ll put the key word in italics so it’ll jump out at you and form a vivid, full picture in your mind when you read it.] He just asked Eileen why not eat chocolate all the time, and she said because it would make her sick:

[page 125] That’s true, it would make you sick. Is there any other reason? Why would you want to diminish your enjoyment of, or your pleasure and attraction to chocolate? We’ll wait here for a few minutes . . . for you to figure out a good reason. (Laughter)

Well, dear reader, were you able to figure it out? Some say it takes will power to control an addiction to chocolate, others say it takes won’t power. The function of the will is one that is often ignored by so-called modern people who think it as an old-fashioned term, but rightly understood, the will is an important aspect of what it means to be human. It distinguishes us from animals who don’t have will power – they act just like animals, don’t they? Here’s a passage in which Bandler gives us insight on what I would call will:

[page 143] I believe that anything that you have to struggle to do is based on not having yourself organized internally in advance.

Isn’t that a beautiful way of thinking about will: having yourself internally organized in advance so that what you want do is a natural action determined from within by none other than you! An entertaining prospect, isn’t it? Ending a statement with tags lines are fun, aren’t they? “Isn’t it?” and “Aren’t they?” are tag lines, am I not right about that?

At one point, he pretends not to remember the name of the process of reframing and lets the man provide the word. Richard Bandler feeds him the clue by saying “umm . . . re something or the other?” [italics added . . . must have been a shortage of italics type when they typeset this book.]

Richard ~~~~ Yes. Reblaming, that’s what it was. (Laughter). That’s where if it’s not ecological you blame someone else in your family. (Laughter).

Humor and quickness – two words that describe Bandler. He does the therapy in seconds, but indulges himself for minutes so that he can charge for the session, so that he charge up the therapists, charging them up to get them to move out of their pearl-lined shells into another and more fun-filled world. Here’s another example of his humor and quickness:

[page 162] (Laughter) Well that takes care of that. Another sixty seconds of therapy. If you know what you’re doing, therapy doesn’t take that long.

As I like to say, "He who laughs, lasts." And that’s an important thing about entertaining a new option: making it last. I’ve noticed that all therapists worry themselves about that – what if it lasts forever and my clients never come back? Not to worry, Bandler tells them:

[page 200] But the intricacies and the delicacies of being able to find out which elements to work with specifically to get lasting results, that’s where the real artistry comes from.

One never knew what was real or not with Bandler. Here’s an example. Read it and you tell me if he actually did what he describes below:

[page 201] I used to run a seminar called the Fabric of Reality. We all got together and methodically dissected our ability to discern what was real and what was not real. That’s why none of those people are here anymore. (Laughter).

Bandler loved to shoot therapists down; that’s why he filled his seminars and taped presentations like this one with therapists. He saw them like stiff, upright bowling pins, all lined up according to the rules of their particular bowling association. By end of a presentation he had them rolling on the floor like bowling pins after a strike. So, in closing, it’s only right to let Bandler show us his “magic in action," and have the last laugh, er, word:

[page 203) That’s why I always loved bowling, except for the part of picking up the heavy ball. (Laughter). You know, I always wanted to shoot the pins down. That seemed a lot easier to me. (Laughter).