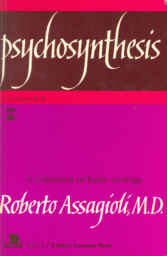 In one of those cosmic jokes that the world likes play on me, I picked up this book from my "previously read" shelf to review minutes after I had just finished sending an email to the Steiner98 List in which I used the phrase, "that dog don't hunt." To my knowledge, I had never used that phrase before in speaking or writing. As I grabbed it, the book popped open to page 22 on which the following quote was circled in red by some previous owner of this book and in the margin was written the same feminine hand, "This dog doesn't hunt."

[page 22] We are dominated by everything with which our self becomes identified. We can dominate and control everything from which we dis-identify ourselves. . . Every time we "identify" ourselves with a weakness, a fault, a fear or any personal emotion or drive, we limit and paralyze ourselves. Every time we admit "I am discouraged" or "I am irritated," we become more and more dominated by depression or anger. We have accepted those limitations; we have ourselves put on our chains.

This is where my "limitation eraser" [, up until now] comes in. If we carefully practice the application of this technique, we will remove all the chains we have successfully hobbled ourselves with, up until now. Note the change if, instead of saying "I am discouraged," one says, "I am discouraged, up until now." By applying the eraser before one reaches the end of a limitation sentence, one swoops with chains to one's ankles and just before latching the manacles, deftly tosses them aside!

What is psychosynthesis? I can't remember much from my reading of this book some thirty years ago, except that Piero Ferrucci was a student of Assagioli and I was very impressed by his book, What We May Be. Here's a brief synopsis of psychosynthesis from the Introduction:

[page 5] The will [is] an essential function of the self and [is] the necessary source or origin of all choices, decisions, engagements. Therefore, psychosynthesis includes a careful analysis of the various phases of the will, such as deliberation, motivation, decision, affirmation, persistence, execution, and make much use of various techniques for arousing, developing, strengthening and rightly directing the will.

So far as I can tell, I only read the book up to page 72, but given that I developed the limitation eraser some years after reading this book, it was far enough for some of its points to have had an effect on me that will last from now on.