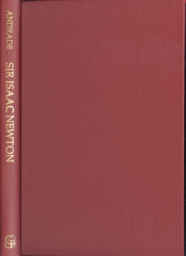 Published by Doubleday in 1958

A Book Review by Bobby Matherne ©2000

The story of the apple and Newton is so well known I would not fain to repeat it but for the fact that the why the story is important is so often glossed over. Here's what Andrade tells us of Newton's meditations at Woolsthorpe. Before the apple fell, Newton had been thinking of the moon's motion a lot, comparing it to a chestnut on the end of a string that is being whirled around - what keeps the chestnut from flying off but a centrifugal force exerted by the string? But what force does the same for the moon, he wondered as he sat in the shade of a tree.

[page 37] This is where the apple comes in. As he sits by the apple tree at Woolsthorpe Newton's meditations are disturbed by the soft thud of an apple falling on the grass. He thinks of it as falling in consequence of the central pull of the earth and then - as far as we can make out - the thought suddenly comes to him, may not the earth, which pulls the apple, also pull the moon? May not it be this pull, suitably weakened by the great distance, that keeps the moon from flying out of its orbit?

That single apple's fall might be considered the greatest windfall in all of history for humankind as it led Newton to formulate his law of gravity and his three great laws of motion, that began the great clock of the universe spinning for science.

People trained in the old philosophy of Newton's time asked him to explain what is this force you call "gravity" and Newton demurred, saying, "hypothesi non fingo" or "I form no hypotheses about its nature." Newton adopted the attitude of Francis Bacon, a new paradigm in science, that one expresses mathematical relationships of measurable quantities, one does not attempt to explain the nature of things. Every revolution, every turning-about, begins with a new attitude. EAT-O-TWIST! Everything Allways Turns Out The Way It's Supposed To -- Matherne's Rule #10.

In Isaac Newton's time, the 17th century, shillings were pure silver, but the coinage was punched out to approximate sizes. Thus the practice came into being that when one received a new shilling from the mint, one could clip off some of the rough edges and acquire a bit of silver while keeping the value of the currency. Well, one clipping led to another and often a particular shilling came to be worth only sixpence in silver. People began to pay out the clipped money and keep the good, thus leading to Gresham's law, which states that bad money drives good money out of circulation. It is reported that the poet Dryden once returned all the money sent him by his publisher because it was so clipped as to be worth less than half its value in silver. (Did you notice that, even with money in pure silver back then, there was an inflation of currency because thieves were clipping money out of sight of anyone? Like the feds do today when they print money on paper that is not based on a monetary standard like silver or gold.)

When Isaac Newton was at the Mint, he oversaw the melting down of the old clipped coinage and the milling of new coins with a calibrated size and weight. He did the job so well that he was appointed as Master of the Mint when the old Master died.

One of his last books, The Chronology of the Ancient Kingdoms Amended, was published the year after he died. In the book Newton amends the dates of the Ancient Kingdoms by centuries, something that Immanuel Velikovsky was to do again in the middle of the 20th Century. Both Newton and Velikovsky's emendations of the established chronologies have been scoffed at and ignored, up until now. I wonder if their chronologies might be in agreement with each other and the so-called experts are the ones that are wrong. Another book that was published after his death was Observations on the Prophecies of Daniel and the Apocalypse of St. John. At this moment I am in the middle of reading Rudolf Steiner's book on the apocalypse of St. John, and I can't help wondering about possible similarities of these two books.

Here is a wonderful description of the scientific process of which school children and college sophomores would be well-advised to take heed:

[page 128] It is possibly true that all very great men of science have a power of, as it were, smelling out the truth, divining what is behind scientific appearances: they do not argue things out to begin with in the nice, clean, tidy manner in which they afterwards present their findings to the world.

And now to allow Andrade to sum up Isaac Newton for us:

[page 136] Well, there is this extraordinary man, of the world yet not of the world; supreme in the exact sciences but a mystic at heart; high-minded and petty; modest and overbearing; suspicious, sensitive and shrinking, but a good man of affairs; arousing admiration, respect and reverence, but no warm human affection. A man who mixed freely with other men of different birth, of different temperaments and pursuits, but always a man withdrawn, guarding, in the ultimate, his own secrets as to what he believed and what he was above seeking: a man revealing great mysteries of nature's machinery but reticent about much which he had profoundly pondered: the first modern scientist and the last of the mages.

And as lagniappe, to close the book, the author presents on page 138 a simple diagram to explain the retrograde motions of planets, something that I had attempted to explain to my wife a week ago as I was reading her morning horoscope to her.