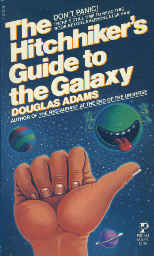 Click to read one of the three reviews of the novels in this book:
Life, the Universe, and Everything
Dirk Gently's Holistic Detective Agency
The Meaning Liff

This review covers all of Douglas Adam's books in one short essay. Heck, if he can compress the meaning of life, the universe, and everything into two short characters, why shouldn't I strive for unabashed brevity as well?

In 1979 Douglas Adams published this imaginative and fun book named The Encyclopedia Galactica, which name was dropped because "The Hitchhiker's Guide to the Galaxy sells rather better." What strikes me today, writing this in 1998, is that twenty years ago, Adams had created in his "Hitchhiker's Guide" a metaphor for the world wide Internet, with its instant capability to look up information about anything on a portable laptop computer hooked into a satellite flying overhead.

Ever have one of those days when nothing seems to go right? Arthur Dent did one Thursday. His house was scheduled [that's SHED - YULED] for demolition for a bypass, which is Brit for freeway or interstate highway. Just as he's planning to lie down in front of the bulldozers to save his house, Ford Prefect shows up to inform him that his planet is scheduled for demolition in an hour to make way for an interstellar bypass. Thus Adams creates the first novel in history, so far as I know, that begins with the complete demolition - indeed, the complete vaporization into extinction - of Earth.

And as Sherlock Holmes would say, "The game is afoot."

This is an amazing book peopled with unforgettable characters such as the three-headed Zaphod Beeblebrox, who like politicians of the non-extinct earth, was always of three minds on any subject, and was often heard talking to himself.

Every good novel has a plot and this one is the search for the answer to "The Ultimate Question." What is that, you say, you who do not want to be bothered by actually reading the book? It is the question about what is the meaning of "Life, the Universe and Everything." Naturally such a monumental question cannot be left to mere humans, and thus it came to pass that the best computer in the universe, the Heart of Gold computer, must be programmed to come up with the solution.

A solution that will take us to The Restaurant at the End of the Universe [Part II of the Trilogy] and finally we will be given the two-digit answer in Life, the Universe and Everything [Part III of the Trilogy]. Just when you thought it was now safe to go outside and check for bulldozers on your own front lawn, Adams came up Part IV of the Trilogy called, So Long, and Thanks for all the Fish, a thank you note from the dolphins.

Adams wrote Dirk Gently's Holistic Detective Agency in 1987, which was as enjoyable as it was forgettable since I forget whether I enjoyed it and remember nothing else about the novel. Given this wonderful experience I stopped short of reading the second novel in my two-volume book, The Long Dark Tea-Time of the Soul. This saved me considerable time, about the same amount of time I could have saved by having skipped the reading of the first novel in the book.

Having plumbed the heights and depths of the novel genre, Adams teamed up John Lloyd on The Meaning of Liff, a small book of definitions of unusual words with the glowing promise on its dust jacket: This Book Will Change Your Life.

An example is "halifax (n.) The green synthetic Astroturf on which greengrocers display their vegetables." For those of you who bought the book, but never made it to page 55, you have missed the essential recursive nature of this book (and Adam's humor):

Liff (n.) A book, the contents of which are totally belied by its cover. For instance, any book whose dust jacket bears the words This book will change your life.

One can only guess that John Lloyd's function in the writing of this book was to keep Douglas Adams from taking himself too seriously, as this definition shows. It is good to know that when the end of the Universe comes, there will be a good restaurant for us to meet in, and over tea and crumpets, we can leisurely observe the Universe as it comes to an end. Till then, remember the words emblazoned on the cover of The Hitchhiker's Guide to the Galaxy: "Don't Panic!"

NOTE: In the 21st Century, The Hitchhiker's Guide became a reality with Google and Smart Phones in every hitchhiker's pocket.