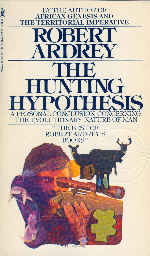 
The hunting hypothesis is: "Man is man, and not a chimpanzee, because for millions upon millions of evolving years we killed for a living." This is the theme that Ardrey has designed his book around. He analyzes the plausibility of his hypothesis by answering such pressing questions as how did the British come to be known as "limeys"? It's because to prevent scurvy due to lack of Vitamin C, they shipped out with a large supply of limes. How did our northernmost ancestors survive without succumbing to scurvy during those long northern nights with no fresh fruit or vegetables? He studied the arctic explorer Stefansson who spent eight months eating nothing but meat and found that meat has ample Vitamin C, if you do not cook it before eating it. All this by way of proving that man was, and still is, a hunter.

Sorry if I can't take Ardrey hypothesis too seriously, but I'm reminded of the Michael Naismith routine he did on his first video disk entitled, Elephant Parts. The scene begins with an announcer in a jungle of foliage talking softly about man being a hunter. He interviews Michael as the Great White Hunter who avers that he will always hunt for his food. The GWH moves cautionly, parting the foliage, takes aim through his telescopic sight, and begins firing shots at heads of lettuce in a supermarket produce refrigerator display case, reveling as each head of lettuce bounces in the air with a bullet through it. "Man will ALWAYS be a hunter!" Amen.

Ever have a friend who, as soon as he saw you, had to tell you the latest sorrowful story of his life? If you've been bugged this way, the following story will take on special meaning for you:

[page 63] One of the most successful — and hilarious — means of defense that has ever come to my attention is that of the larva of a beetle called Cassida rubiginosa, whose natural enemy is a predatory ant. For a long time zoologists groped for the selective value of a trash packet that the larva carries on its back as it crawls along. A two-pronged fork rises from the tip of the larva's abdomen, catching successively molted skins to form a kind of tray. Anatomically the feature is odd enough, but it is combined with an anal tunnel that rises to deposit fecal matter in the packet. A solution was finally found in the temperament of the ant whose weakness is a fastidious nature. When the ant approaches and gives its prey a preliminary feel, the larva goes into action with its trayful of unpleasantness, splattering the ant. The fastdious predator has no choice but to fall back and clean up, while the larva goes its way. The device is known as the fecal shield.

Come to think of it, this could be a metaphor for a handy way to rid one's presence of such fastidious bores. The process bears a little research and development.

Ardrey "proved" all men are not created equal in The Social Contract, that man has an innate drive to defend his property in The Territorial Imperative, that man has a killer instinct in African Genesis, and in The Hunting Hypothesis he completes his defamation and derogation of humanity by just as unimpressively proving that the male of the species was, is, and will always be a hunter.