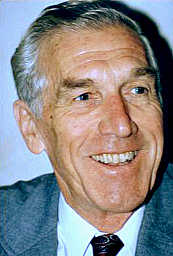 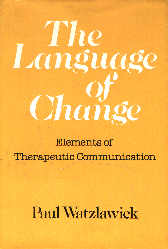 The Language of Change
Elements of Therapeutic Communication
Chapter: Psychotherapy

by
Paul Watzlawick
Published by W. W. Norton and Co/NY in 1978

This book was written in the mid 1970s when interest swelled in Milton Erickson's hypnotherapeutic work. Watzlawick dedicated the book as follows:

To Dr. Milton H. Erickson, Who Heals With Words

Around the same time interest in split brain studies began and Right Brain-Left Brain studies were written up in many journals and books, especially in the field of psychotherapy. The reductionists even claimed to be able to explain Erickson's techniques in terms of left-right brain communication. In this book, Watzlawick explains the two languages of the brain, the left brain mode of the scientist and the right brain mode of the artist. The studies of the sides of the brain used the standard tool of medicine: examine how a human with a defect in a certain area acts in order to determine what function missing in one who has a defect or lesion in that area compared to one without a similar defect in the same area. A normal person without lesions is like a fish swimming in water who is unable to understand what water is until it flops out of the water and is unable to breathe. Once a lesion is present studies of functions are compared to normal persons and pertinent functions are identified for the area with the lesion.

[page 26] In his book The Double Brain, Diamond mentions several studies which show that lesions of the right half of the brain can also impair the execution of sequential processes (for example, dressing), which — I assume — have become quite automatic as a result of numerous stereotypical repetitions and were probably stored as right-hemispheric subroutines, recallable at will before the lesion.

It is normally understood that the left brain controls sequential functions and the right brain more holistic or global functions. Diamond's studies showed that the global repetition of certain sequences are stored by the right brain even though they comprise sequences of left brain functions. Watzlawick goes into details about the split brain experiments with patients who had their corpus callosum cut, a commissurotomy, as it is called. Severe epileptic seizures were eliminated by this surgical procedure and only specially constructed experiments could discern a difference in the patients. They acted as though they had two different brains. Their visual field and hands acted as a channel of communication to replace the plenum previously provided by their corpus callosum which connected the two sides of the brain. Thus, the experiment required that the visual fields be separated and objects placed in the visual field of one side of the brain be handled by the hand connected to the other side of the brain. Under those conditions very interesting and insightful results were obtained.

[page 30-31] In the series of neutral geometrical figures being presented at random to the right and left fields, a nude pin-up was included and flashed to the right (nonverbal) hemisphere. The girl blushes and giggles. Sperry asks, "What did you see?" She answers, "Nothing, just a flash of light," and giggles again, covering her mouth with her hand. "Why are you laughing then?" asks Sperry, and she laughs again and says, "Oh, Dr. Sperry, you have some machine!"

The experimenters noted how similar her response was to someone who might be repressing some inappropriate sexual material. It is almost as if someone suffering from repression had achieved a functional commissurotomy such that communication between their left brain and right brain were blocked for certain subjects even with an otherwise intact corpus callosum.

[page 31] The minor hemisphere also commonly triggers emotional reactions of displeasure in the course of ordinary testing. This is evidenced in the frowning, wincing, and negative head shaking in test situations where the minor hemisphere, knowing the correct answer but unable to speak, hears the major hemisphere making obvious verbal mistakes.

The authors are "led to the assumption that we have two conscious minds which, ideally, are capable of harmonious, complementary integration for the purpose of grasping and mastering our outer and inner reality, but which, if and when conflict arises, may be unable to communicate with each other for lack of a common language." (page 38) How does all this knowledge of left-right brain function become useful in therapy? The author list these three ways and deal with them in separate chapters:

1. The use of right-hemisphere language patterns

These three chapters 6, 7, and 8 comprise the bulk of the useful part of the book. There are many examples given in the three chapters, all of them worth reading directly, but I'll share one in the behavior prescriptions chapter. It involves Milton Erickson, world-renown hypnotherapist in his time, who paradoxically did his best work without doing anything identifiable as hypnotic trance. This was one of those cases. A couple who owned a restaurant came to Milton for help. The wife insisted the husband should manage the restaurant, but the husband insisted he'd like to manage it, but she won't let him. What did Milton do? He arranged for the husband to get to the restaurant a half hour before the wife did! That's it. And here's what happened:

[page 134] When the husband arrived a half hour before his wife, he carried the key. He opened the door. He unlocked everything. He set up the restaurant for the day. When his wife arrived, she was completely out of step and way behind. So many things had been set in motion by him and he was managing them.

Within a week or two the wife was staying longer at home, finding things to do there, while her husband showed her that he could run the restaurant. Both parties were happy. All it took was a little action - no interpretation. Master at work.

Just in case you may think that this example makes it sound all too easy to create deep pervasive change in a person, let me demonstrate a technique for anticipating resistance offered by the ancient Greek therapist Aristotle. This is bound to sound a bit ridiculous, but you preempt the resistance by bringing forth reasons to show that you are justified in offering advice. If you still don't understand what I'm getting it, let me say that there exists a relatively simple solution, but I'm almost sure you're not going to understand it or like it at first, especially if you feel that I'm doing something a little sneaky. This will be difficult for you, because on the surface this approach is likely to look quite absurd.

The previous paragraph was a summary and a demonstration of the methods the authors give of "preempting" the resistance (Pages 150-151). If you weren't reading this right now, I would explain to you a close derivative of preempting which is pretending that you're not saying something while you actually say it. In fact, when you use the word "not" you are likely using this very process. "Do not think of a pink elephant." was the example I heard Bandler and Grinder use a lot in their early seminars in the pre-NLP days. What was the color of the elephant? Everyone knew it: pink. Try this: as you listen to people talk, drop the not's from their words. You'll have immediate access to the images or realities that they are living within. I would not want you to think that you can always re-phrase a sentence containing a not so as to create a positive image of what you want. I know that as of now most people do not look at communication that way. Cut that out!

Sorry 'bout that, Chief, got carried away. It will not happen again.

Okay, I'm incorrigible, but if you do not think that this book contains lots of great ideas about how to achieve deep pervasive change in people's lives, then perhaps you should meet my friend Tony who told me the other day, "You know, Bobby, there is no such thing as piano playing; I have myself tried it several times and nothing came of it."