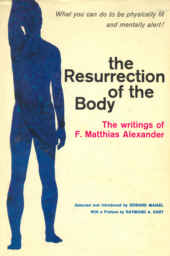 The Resurrection of the Body
The Writings of F. Matthias Alexander
Chapter: Psychotherapy

by
F. Matthias Alexander
Published by University Books/NY in 1969
A Book Review by Bobby Matherne ©2007

During the heyday of pop therapies and bodywork in the 1970's, I was introduced to something called the Alexander Technique, which was a curious combination of therapy and bodywork. Eventually I found this landmark written by the originator of the technique. Here from the long Introduction by Edwin Maisel is a concise summary of the technique:

[page xl] Mr. Alexander's technique unravels the kinks and complexes by a process of positive replacement in which sound coordinations are built up with their corresponding alterations in habitual sensory and emotional data, while at the best the psychoanalysts merely untie a knot and leave the organic causes which produced it untouched.

How does one go about this "positive replacement"? Inquiring minds and bodies want to know. Alexander's point is that one must "stop oneself" from proceeding in the usual way, then proceed in the new way one's Alexander teacher directs in a conscious way until the new way replaces the old, dysfunctional way. This stopping, replacing, and moving into use of new ways of moving and being is at the essence of the Alexander technique. The procedure is the process of new habit formation, which can be considered to evolve over four distinct steps:

1. Unconscious Incompetence - you don't think of the new behavior, and can't do it.

2. Conscious Incompetence - you now think of the new behavior, and can't do it.

3. Conscious Competence - you think of the new behavior, and can do it.

4. Unconscious Competence - you don't think of the new behavior, and can do it.

In the Alexander technique, through the skilled intervention of a personal teacher (what now we call a coach), someone notices behaviors in you that are deemed dysfunctional and designs new behaviors. You are then directed to perform the old behavior and when you do, you are told to "stop" and the new behavior designed by the teacher is inserted in the place of the old. You perform the new behavior consciously several times, and your coach monitors you for any relapses into old behavior. Soon the new behavior becomes automatic.

An example in the beginning of Chapter Three tells of a little girl who was unable to walk properly. Soon Alexander had her comparatively straightened out and able to walk without the twists and distortions of earlier. His techniques of stopping the old patterns and manipulating the child into the new postures and movements worked wonders where formerly all previous of her teachers had met with failure.

[page 17] When this was done, the little girl looked across at her mother and said to her in an indescribable tone, "Oh! Mommie, he's pulled me out of shape." . . . In accordance with this poor child's judgment, her crookedness was straightness, her sensory appreciation of her "out-of-shape" condition was that it was "in shape." Imagine, then, what would be the result of her trying to get anything "right" by doing something herself, as she had always tried and had always been urged to try to do, whilst practising remedial exercises according to the directions and under the guidance of a teacher. Small wonder that all attempts to teach her had resulted in failure!

I had a similar experience in my attempts to sing based on trying to hit the note on the score on the paper. I was most always off-key and trying to sing while figuring out why I was off-key only made the situation worse. Then I met Del and make the astounding discovery that I could easily match the notes she sang as I sang along with her. I learn to sing by stopping the dysfunctional behavior and moving to a process which achieved the result I wanted. Using this process I was able to sing well enough to sing in a Barbershop Chorus at the 1984 World's Fair in New Orleans on several occasions. I had trouble singing Lead in a Quartet for the reasons listed above, but in a chorus with multiple Leads I had no trouble staying on key. I remembered how before Del the more I concentrated on singing the worse it became. Alexander says, "Beware of so-called concentration." and "Personally, I do not believe in any concentration that calls for effort." He says that not amount concentration will overcome the typical conflict between the "I must" and "I can't" and that only the transcendence of the conflict by an "I wish" will "what was difficult become easy and pleasure substituted for pain." (page 82)

[page 83] The brain becomes used to thinking in a certain way, it works in a groove, and when set in action, slides along the familiar, well-worn path; but when once it is lifted out of the groove, it is astonishing how easily it may be directed.

And it is astonishing the results that Alexander was able to achieve with his technique. He was able to re-align bodies as dramatically as Ida Rolf was with her deep tissue massage. One might consider Alexander as a "painless Rolfer", but that would be to ignore the deep psychological problems, speech problems, and overall salubrious effect he had on the lives of all those to came to him to have their dysfunctional processes replaced with life-enhancing functional ones.