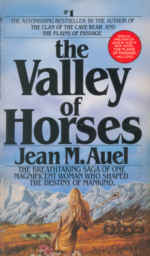 The Valley of the Horses
by
Jean M. Auel

During the first book in the Earth's Children series, Ayla suffered ignominiously at the hands of brutish men of the Clan of the Cave Bear. Near the end of the book, she was cast out of the Clan because she dared to use a slingshot to hunt with, among other things.

Raped, beat-up, scorned, and finally exiled by men, she was well on her way to becoming a man-hater by the end of the book. What made The Valley of the Horses a welcome relief because early in this book, she meets a man of her own kind and for the first time she admires a man, finds him interesting.

Ayla could not get enough of looking at him, and she studied his face as though she were trying to satisfy all at one time her years of yearning for the sight of another human. . . . [from page facing Title Page]

For the first time she meets someone who has a name that is not a series of grunts, someone with the hunting, thinking, and speaks skills that rival her own. Suddenly the prospect of actually enjoying sexual intercourse opens to her. On the plains, with horses, bountiful game, and a new mate, Jondalar, the dark desperation of her cave days is washed away in sunlight and happiness. Two adventurers on horseback at the dawn of humankind.

The spark from her flint kindles a fire in the hearts of those she meets. She follows Jondalar to meet his people and wonders where her people are. "Who taught you to make fire that way?" someone asked her. "Ayla do," was her answer, as she struggled with a language that had no word to express her "I" — that fire, that "I" of Ayla shines through all of the Earth's Children series. Don't skip over this one!

1. The Clan of the Cave Bear
2. The Valley of the Horses
3. The Mammoth Hunters
4. Plains of Passage
5. The Shelters of Stone
6. The Painted Caves