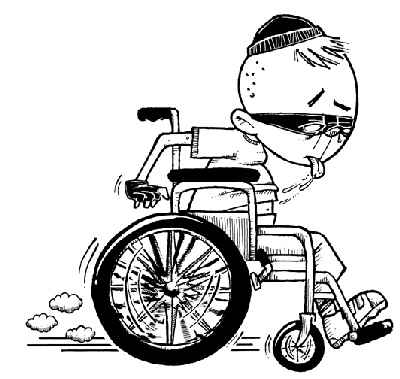 When we last saw our hero, Calvin, he told us, ďI'm floating on a cushion of fresh air. I've decided that if I had Arnold's posique that I would be looking dirt and pretty.Ē

This encouraged us, because Calvin was finally asserting himself. Later when Wag mentioned that someone was handicapped, Calvin said with pride, ďI'm handicapped, too, let me count the ways!Ē ďCalvin, you're an idiot!Ē Tim offered. Calvin, without thinking blurted, ďI know I am, Tim, but what are you?Ē

Merle was talking about his high school graduation and Calvin said, ďI have remonitions of that day.Ē Just ten Lacy walked by and Calvin drooled, ďOh Baby, Oh Baby, you make my heart go poundy-poundy.Ē He looked at us and said, ďI'd like to put fire in her bubble. Too bad she's just a golddigger, and after all I'm no Wrecker Fella! She'd take me to the cake.Ē

Calvin did golfing -- his usual five holes. ďMost of them I spent in the sandboxes,Ē he reported to us the next day. He said that by the time he finished, his shoes were all clogged with mud. We asked him what he did. ďI cleaned the spikes right off of my golf shoes,Ē he replied. Chuck said, ďYou did what?Ē ďI did it, Chuck, if you don't believe me I have two proofs that I did.Ē

Meanwhile, Calvin's wife had taken her monthly trip out of the country. We asked him if she had gotten back. ďShe went as far away as possible, and when she got back Sunday night, she was deader than a doorknob.Ē

Earlier while his wife was out of town Calvin felt he could take liberties and tried to make points with a secretary in the office, Karen. He told her, ďYou know, Karen, you will be attractive once you get into your 40's.Ē

I asked Calvin what he meant by that and he said, ďMatherne, you got wandering ears. Those are just numerical numbers, you Cosmo-Reatard!Ē

Later Calvin got tired of waiting for Tim to do something with him and said, ďTim, I gonna have to light a fire under your flame to get you off your Careetozoids.Ē When he and Tim finally arrived at Curtis's workstation with the package, Curtis said, ďThere's a whole gang of you.Ē Calvin said, ďMy friend, we're coming out of the woodworks!Ē

Back in the planning area, Steve had just given Calvin a raspberry over the phone. Calvin said, ďSteve, you fluttered at me over the phone on purpose.Ē In his agitated state, Calvin dropped his phone and exclaimed, ďWell, butter me timbers! I made the phone hit me!Ē

He told us later that last night his wife attacked him for coming home so late, ďI was a-ditchin' and a-divin' and Katrina was swinging at a missing object.Ē ďShe got me so mad -- you guys know I don't have an anti-human bone in my body -- so I just ignored it all and went outside to put some anti-freeze in my car's Air Conditioner.Ē Steve asked him what he had been really trying to do, and Calvin shot back, ďYou take my meaning, you Cosmo-Reatard! Never mind with your nasty self! Cut the sleeves -- hit the track! That's when the fire hits the ice!Ē

And the fire hit the ice that day. 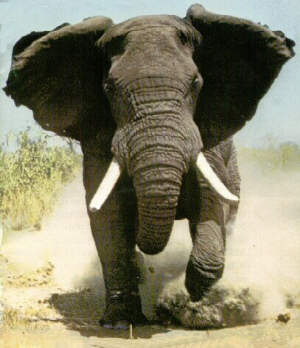