The Perfect Man of the Year

Darlene, I just finished the Word Perfect beginner's class yesterday. Would you call and sign me up for the middle class?” Calvin called into his office intercom.

“Yes, Mr. Preston, right away.” A few minutes later his intercom buzzed. “Mr. Preston, I have great news. The WordPerfect Corporation has selected you as their “Perfect Man of the Year!”

“Wow! I'm so happy I could just hop, skop, and skip away! And yesterday everybody in the class just ridicured me!” Calvin was ecstatic and wanted to call his wife right away. He pushed his automatic phone dialer and nothing happened. “Darlene,” he said into the intercom, “call maintenance, my one-finger push-button is broken. By the way, how did I get chosen 'Perfect Man of the Year'? Wandering minds want to know.”

“They told me that every year they choose a class member at random to be honored and you were selected this year. They're giving a banquet for you and the previous winners tomorrow night.”

“All right! Us geniuses gotta stick together. We're meticulous and miraculous!”

The next day his friend Charlie popped open Calvin's office door, “Hey, Cal, brought you some donuts to eat.”

“Good, Chuck, hope you got my favorites, those Barbarian Cremes,” Calvin said as he searched through the box. He found one and took several large bites.

“Calvin, what's the buzz? Darlene's all excited about something.”

“Geniusism, Chuck, pass it around! I'm so happy I could die between here and now!”

“Calvin, you're not making any sense,” Charlie said, “you're a sorry sap.”

“I am not a tree!” Calvin said indignantly, “I'm the 'Perfect Man of the year! I just found out yesterday and I nearly fell over when I heard it. My feet were tripping and my mind couldn't catch up. I guess my feet were thinking faster than my mind.”

“Oh,” Charlie said, “that's why Darlene said some Oriental lady is coming here to take you to a banquet.”

“Yeah, Chuck. You can come, too, it's tonight. I hope the food will be on your Jean Nateece diet.”

“Jean Nate', Jenny Craig. So? I got the first letter right. It's one of those words that's got the hyphen way up there,” Calvin relied, raising his hand high in the air. “We'd better go now, Chuck, that Viepmanese lady is waiting for me.”

Calvin got behind the wheel of his silver Galant and Charlie got in the back seat. The prim Vietnamese lady sat in the front passenger's side and began interviewing Calvin on the way to the banquet.

“Do you like the sun roof on your car, Mr. Preston?” she asked to open the conversation.

“Yes, Ma'am, I do. It helps block the shade,” Calvin said. “But the thing I like most about my new car is its rickety-rackety pinion steering.”

“I was thinking about getting a moon roof on my new car,” she said.

“A moon roof, what's that, half a sun roof? I never saw one, but I heard that my niece-sister-in-law has one on her new car.”

“Your niece-sister-in-law? Who's that, Cal?” Charlie asked from the back seat.

“Amy, she's married to my nephew. Hey, Chuck, you got any more of those portable Chocolate Crunches? I'm hungry.”

“That's okay, Chuck, we're just a hopscotch away from the banquet.”

“Christina told me your son got suspended from school for fighting,” Charlie said, “what happened?”

“Oh, Chuck, he hit this kid who was molestering my daughter - you know - foundering her. I had to go to school and talk to his councilman. My son said he was a victim of blind innocence and I believed him. I didn't like his councilman at all - it was like talking to a dictionary.”

“Did he try to get you to take Chad out of his school?” Charlie asked.

“He tried to coast me into it, but I said, no way! I said it mean, but I was firm. So I didn't punish Chad. I thought I'd broaden the horizon.”

“Yeah, Charlie, my brain is definitely quicker than my mind.”

Just then a car cut in from of Calvin and he got very angry. He rolled his window down and yelled out, “I'm gonna give you the bone and the finger at the same time!”

“There's the hotel, Mr. Preston,” the lady in the front seat said.

Calvin looked over and noticed she was blushing. “Excuse my French, I didn't mean to make you turn beak red.”

“Look, Calvin,” Charlie said quickly, “there's a parking spot right in front of the hotel. You can park there. You probably won't get a ticket this time.”

“No, Charlie,” Calvin said, “I was stupid three times, I'm not going to be stupid twice. And that's the truth. I’m dead lying!”

They parked in the hotel lot and were walking to the banquet entrance when Calvin spotted a dog digging in some trash. “Look, Charlie, it's that famous dog, Rin-Tin. I saw him in that movie we went to the other night after we left the Holly haunted house.”

“I think I'll strut to that one, Big Boy,” Calvin said, “I got mental celebrity! It must have been my performance on the grammar section of the class. I got all my vials and continents perfect. I'm on my way, Jose' . . . Feliciano! I fit the tee!”

“Calvin,” Charlie said, “It looks like I have to pay for my meal. Have you got a blank check I could use?”

“Your dinner will be taken care of, sir,” their hostess said to Charlie.

“Thanks,” Charlie said, “well, Calvin, are you excited?”

And he never mentioned if he slept an ounce again. 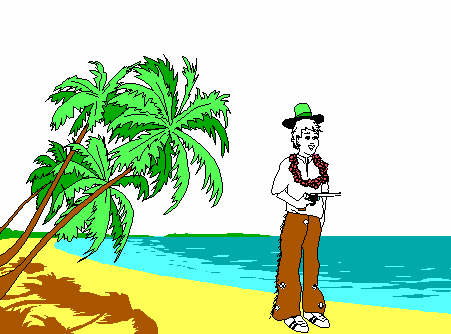