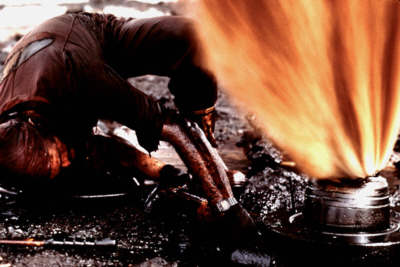 RING! RING! RING! The phone on Calvin's desk was ringing just as he and his secretary, Rusty, returned from lunch. “Rusty, get that quick. I'm expecting a call from Fred Astaire, the famous oil well fire-fighter.”

“Red, that's what his friends call him,” Calvin whispered back, as he took the phone from her.

“Hello,” Calvin said into the phone, “yes, it's me. I have a mild-mannered voice. Sounds like you're in the middle of a hot potato over there.” Calvin went through a long conversation but all Rusty heard was “Yes” coming from Calvin's mouth every few seconds or so.

Finally Calvin handed the phone back to Rusty to hang up with a “Whew!”

“What happened, Mr. Preston?” she asked.

“Rusty, you wouldn't believe the thirty degree I went through. That man's tough as fingernails. He wants me to help him put out a large oil well fire in Kuwait.”

“What will you be doing?”

“I'll be the guy who will carry the dynamite and drop it into the burning oil well.”

“Only if it explodes. But they'll be spraying me with water all the time. Anyway, like I always say, 'What you don’t see, don’t hurt.’ ”

“Doesn't Red have anyone else who can do that job?”

“Just this one guy, Sam Farkle, Frackle, or something. I forget his name -- I'm bad with memories. Anyway he had an accident -- he trips when he chews gum, so Red won't let him carry the dynamite anymore. Call and get me a flight to Kuwait right away. I've got to see if Tim and Charlie want to come along. By the way run over to the Piggy Wiggy and get me a box of Grape Nuts - you know, for my Prickly Diet. They might not sell them in Kuwait. I know there’s some other things that Dr. Prickly recommends, but I can’t think of them now -- I got too many other shit on my mind. Oh -- while you’re at the supermarket, buy yourself some more flowers for your desk. Those roses have dead pedestals for petals.”

“ I gotta go now -- I’m chomping away at the bit,” said Calvin as he closed the door.

Two days later, Calvin, Tim and Charlie were flying to Kuwait. They had stopped in South America to pick up some fire-fighting gear and were flying over Africa on the last leg of their trip.

“Look at that enormous herd of cattle,” Tim said. He was standing in the aisle of the first class cabin, leaning over Calvin’s seat and pointing out the window. He had his right arm stretching such that Calvin’s head was almost under his armpit.

“Stop putting your cockpits in my face!”

“Oh, I know what that is -- that’s the Willow Beast migration. I saw it on the Discovery Channel last week,” Calvin said proudly. “They all go into a ditch and drown. It’s awful.”

Charlie, who was busy eating breakfast, said, “I’m sure glad you brought those Grape Nuts. They’re great. You’re getting to be a regular cereal guy, Cal.”

“Oh, that Cereal de Bergerac!” Charlie said, smiling. He was used to Calvin’s malapropisms, but never missed a chance to have Calvin explain one of them. To Charlie it was like fishing -- when they start biting, you keep throwing out baited hooks till they’re all in the boat.

Their first stop in Kuwait City was the hospital where Sam Farrell was recovering from surgery after his accident at the well site. Calvin was talking to Sam at his bedside where Sam was in traction. Tim and Charlie had stopped to buy some supplies for the fire fighting.

“Look, Sam, there’s Tim and Charlie now,” Calvin explained to his friend who was unable to move or talk very much. “Unngghh, unngghh” was about all Sam was able to get out.

“Better than he looks, I guess. They got his head taped across his forehead to the bed to keep him mobile.”

“Look,” Charlie said, “that must be Sam's doctor coming this way.” A dark skinned man wearing a white turban came up to Sam’s bed and flipped over a page on his clipboard. He started to say something when suddenly Calvin bowed deeply towards him and said, “Oh Salami, Oh Salami.”

In impeccable English the doctor explained that Sam would be out of the hospital in a few days, but that he would be recuperating for several months.

“Looks like our itinerary is all messed up,” Chuck said.

“Okay, okay, don't ruffle your dandruff,” Charlie shot back, amused at his own use of a Calvinism. The doctor looked at both of them, mumbled something, then took his leave, saying he was expected over in Pathology.

“That's the study of pathetic people,” Calvin offered, with a self-assured look on his face that defied correction. “By the way, did you guys get all the equipment we need?”

“Yep, we even got some earplugs for you to wear when you dump the dynamite in the oil well fire,” Tim said.

“Wait just a minute! If I wear earplugs I won't be able to hear myself,” Calvin said, “but that's okay, my senses only work one at a time anyway.”

“If that dynamite goes off while you're carrying it, you'll hear it alright!” Charlie said.

“Why don't they just use a big crane to drop the dynamite in the hole?” Tim asked.

“I tried to tell them, Big Boy, but they wouldn't adhere to me.”

The three companions packed up their jeep and motored out of Kuwait City towards the darkening sky.

“Look at that, Calvin,” Tim said, “it's almost eye-boggling.”

“Yeah, Tim, it looks like a Molly Tail cocktail. It really makes me mad, too. I think we should bomb all of Iraria.”

At the well site the heat was very intense and a strong wind was blowing. They helped Calvin into his fire suit and placed the visor over his head.

“Can you see, Calvin?” Tim yelled over the roar of the oil well fire.

“All I can see is basically light,” Calvin shouted back. .

“Remember there's some metal debris to the left side of the hole. Think you can work around that?”

“What about the suit? Does it fit you okay?”

“The bottoms are so loose I could stick my pants down my arm -- but they'll be okay once my body gets adequated. Anyhow this'll only take a few minutes.”

“Calvin,” Chuck said, “you look like a big banana in that yellow suit.”

“Shut up, Banana Kid! Get me the dynamite pack. I wanta get this over with. It's so hot in here I'm getting dry rout.”

After several radio tests of Calvin's headphones, he put on his rain hood. His buddies sprayed water on him as he turned in the direction of the fiery hole. He carefully held the dynamite pack away from him on the end of its ten foot pole.

“If I were a supervisor, I'd be in control -- I'm not controlling myself now -- I'll just take a gander walk over to the hole and then I'll hightail it out of there.”

When Calvin reached the hole, he did a sudden move to the right, placed the end of the pole over the fiery hoe and released the dynamite. Dropping the pole, he ran back to the bunker and jumped in. He had just cleared the embankment in front of the bunker when the well exploded.

Within seconds the fire was out and there was a strange quiet for a moment, then a loud roar as the gas and oil gushed high in the air and began to drench the crews. Cheers rang out as the workers ran to buckle the well head in place to stop up the well.

Calvin and his friends congratulated each other as they walked to the trailer to shower and put on clean clothes. Their job was done.

“Maybe we should send a cable back home so the girls will know we're okay,” Chuck said.

“Good idea, Chuck,” Calvin said as he came out of the shower, “You write it and I'll have a go-getter take it to the cable office.”

“Why don't we just call them on the phone?” Tim asked.

“Numb Nuts -- Quad Head!” Calvin scolded, “There's no telephone in the desert. Look at those people over there,” he said, pointing out the window at the Arabs passing in a jeep. “You know what all those people have in comparison? They're all Muslins. They pray in Mosque Code. I heard one of them yelling prayers from the top of one of them Minuet Towers yesterday morning before we left. That's why there are no phones in the desert. They don't need them. Except in their Rolls-Royces, of course.”

Charlie began laughing and this perturbed Calvin. “Just remember, Big Pilgrim, he who laughs first, laughs last.” At this Charlie began laughing more. “Stop that, Chuck, don't go putting more fire on the flames. Look at him, Tim, he's having himself an instant orgasm. He sounds like a gibbling, gobbling goose.”

Later on the flight home, the boys were reminiscing about their adventures in Kuwait. “I'm sorry we didn't get to meet Red,” Tim said to Calvin as he looked out the cabin's window at the distant ocean below.

“Yeah, Big Boy,” Calvin answered, “I meant to tell you. Red had to fly home to his brother's funeral. Red said his brother left a note saying he wanted to be excremated after he died, you know, like a steak.”

“Yeah. He's got three brothers, four counting himself. That is, until this one murdered himself.”

“I know. Once in Venezuela I watched Red really give Sam some lip service when he dropped the dynamite before reaching the hole.”

“I could call him my fellow asshole, but that would be nice.”

“Speaking of hole,” Charlie said, who had just sat in the aisle seat, “that was some dance you did to dodge the old well head when you got to the hole in Kuwait.”

“Yep, that was one of my Hari Kari moves that I learned from Joe Jitsu. I took the ball by the hand and went straight to the source. I didn't have much choice by then -- I was at the end of my ropes. Did you see me as I cleared the embuttment jumping into the bunker?” Calvin puffed up his chest and said, “I guess you can just call me Mr. Suave' Boner.”

“Are you gonna watch the in-flight movie, Cal?” Tim asked looking for the earphones.

“Sure, it's that new Clint Eastwood movie, The Unforbidden. I wouldn't miss it for anything. Where's the stewardess? I want to get some more M&M's. I'm putting them in alphabetical order.”

“Oh, they got numbers on them?”

“Here comes that cute Hispanic stewardess. Did you get a date with her, Cal?”

“Mexico, Mississippi, same thing. So, I got a glitch in my thinking cap, okay? You guys'll miss me when I'm dead gone and in prison.”

And who knows but that they will. 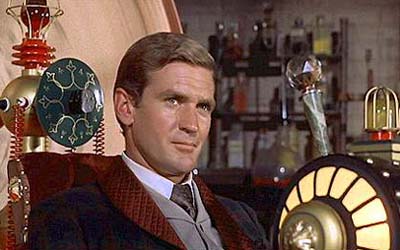