Faces of people with Unwanted Doyles.

All material on this page ©2003 by 21st Century Education, Inc

Gary's Speed Trace Experiences in his Own Words

The following is an unedited email from Gary. Thanks for your permission to share this with the world. Bobby Matherne, March 31, 2018.

Yesterday, Late afternoon and I had taken things for dinner out of the fridge and into room temperature. I placed them on the kitchen utility table and carried on with my late afternoon activities.

I took out some recycling and brought in 11.35 litres of drinking water and put it into the fridge. I put fresh clean sheets and pillow cases on the bed. I sharpened about six dozen pencils. (Sharp HB pencils are my favourite writing instrument.)

As the afternoon wore on, heading for an evening, I felt a very peculiar state of stress. I wasn’t feeling at ease and comfortable.

It was mild as distinct from severe. It was not a state of panic but it had enough intensity to get my attention. When I considered it as body-state/sensation/mental disruption, it was a peculiar disquiet and discomfort.

I sat at the computer, organizing some photographic material to send to a friend. A kitchen light was on, hunger had set in and the local and kitchen lighting seemed to be having a subtle emotional impact on me. The kitchen lighting, a presence of food to eat later, and the hunger sensation were triggering a doyle.

I was deliberately staying hungry for weight loss outcomes. The disquiet intensified. I realized that I probably had had a doyle hatch out of some trigger(s).

I lit a tea light candle, turned on some white noise surf crashing, laid down on my bed, gently holding a Tibetan Dorje in my right hand, and clutching the doyle sensations firmly in my consciousness.

I ran the Speed Trace and deeply felt the sensation/body-state and mental disruption completely evaporate when I got to age three. That is one astonishing sensation, by golly!

I experienced no immediate insight into what age-four events produced the doyle so I just continued to lay on bed quietly and give it some thought. And I discussed it with a handler.

I soon realized that I carried an early memory from age four that had me wake up hungry one night and seek out nourishment.(1)

I had left my bedroom, went down a flight of stairs, through a main floor hallway and entered the lighted kitchen. I didn’t know the time beyond nighttime. I already had some sketchy visual and audible memories of some of the events that followed.

There was a quite loud Mother vs. Father argument taking place. It was heated. I heard it while going downstairs and through a hallway on my way to the kitchen.

The noises distressed me because in recollection, it seemed that I had no prior experience of the parental units behaving this way, yelling at each other. Angry sounding.

After I arrived in the kitchen, the shouting rumpus went quiet, and I expressed a need to satisfy my hunger sensations after obtaining the attention of the parents.

My mother put margarine or butter and honey onto a slice of bread.

She cut the slice into four pieces, put those on a small plate and handed it all to me.

I seem to recall taking the food back to my bedroom to consume but that was the extent of my almost cognitive memories of the event.

To get an idea of how confused and disturbed I was after that, examine the photo below of me at age four with my younger brother: 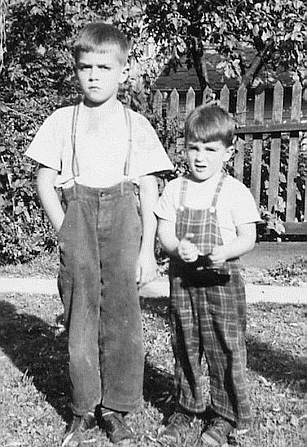 What I experienced yesterday: the doyle was a mix of fear and confusion — which for me, takes the shape of a form of anxiety — plus a hunger sensation. The 2018 kitchen lighting and my protracted hunger were the triggers for a state of confusion+fear = anxiety.

At the time of obtaining that doyle, I already carried a pair of doyles obtained at different times in deep childhood.

1. There was an impetigo blister puncturing with sewing needles event after needles becoming heated/sterilized in a candle flame (nine months) and...

2. A second circumcision, also dealt with via seeing sewing needles heated in candle flames (12-13 months) and used to dig stitches out of my pee-pee!

A fear and confusion (anxiety) doyle became re-stimulated and these mixed and merged with the body-state of hunger.

Usually, when I would notice that my hunger was present during late afternoon or evening hours, there would be an accompanying vague sensation of anxiety about it. I would think it maybe connected with my weight-losing-project and believe it was just that I wasn’t feeling that pleased with my progress.

Or, a wilder fantasy would have me feeling an anxiety that I was pushing the dinner hour too far into the later evening and that it would compromise my sleep time and I’d sleep in and be late for work, even though fully retired for nine years and not holding any formal “jobs!”

An irrational fear, but I‘d been feeling emotional disquiet and discomforts that I couldn’t attach any verbal label to. There are subtle, elusive doyles!

This was exactly like what I identified yesterday evening and it has been hanging around until it became intrusive enough for me to notice and do something about it.

This dispatching of yet another doyle has given me some insight into ‘networked’ doyles, something you have written and published about on your www site.

Perhaps 'channels’ are too strange for people to think about as emotional experience, but I can relate to the idea of a “fear channel,” a “hunger channel,” a “confusion channel,” and an anxiety channel which did, for me, emerge from a convergence and fusing of confusion, fear, anxiety and hunger channels.

Thank you for your wonderful monthly reports. If you need to use anything from my own personal report here, please don’t hesitate to do so. It’s the least I can do to support your valuable work.

I plan to run another speed trace on the hunger/anxiety doyle and attempt locating exactly WHEN those events took place while I was four years old. There may be more to unpack there and transmit via my hippocampus cortex memory storage.

Return to Text before Footnote (1)

Many blessings on you, Gary. Thanks for helping me undertake this great journey of showing people how to create a bad-doyle-free world for themselves from now on.

Faces of People who have Traced Away Unwanted Doyles!

Did you Find this doyletics webpage useful?
Want to keep Updated on changes to Doyletics Website?
Subscribe to our Good Mountain Press Monthly Digest now
and keep informed of changes to doyletics website.
To Return Here from that page, Click your BACK button when Ready.
For a Sample of a Recent Digest on-line. Click Here