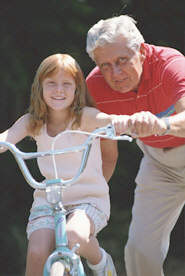 Counselor's Tidbit: Systematic Reframing as an Adjunct to the Speed Trace

All Text on this Page Copyright ©2004 by Bobby Matherne

Note: If you have a Case Study that you would like to add to the Counselor's Tidbits Page, please send them to Bobby@doyletics.com

Sometimes when you are helping someone do a trace, you do everything right, but the doyle doesn't go away. That happened to Marge with her husband Sidney. [not their real names] They had already done many successful traces, so it was time to try something different. The tool I suggested was one developed by Richard Bandler and John Grinder in the early days before they even began calling what they did Neuro-Linguistic Programming or NLP. It was called Systematic Reframing. When you reframe something, you take it from some old moldly unattractive frame and clean it up, re-matte it, and place it into a new shiny frame. Suddenly the picture takes on a new life and aspect that you never fully appreciated before. That's a metaphor for what happens when you do systematic reframing. The behavior that you don't want suddenly reveals a good intention that you were unaware of and when you discover the good intention, you can find other behaviors which will be equally affective of achieving the good intention. That's the essence of what happens during systematic reframing.

This overall case study involves Marge and Sidney. The names and some of the incidental material is fictional to disguise the identity of the people involved. Marge wrote to me that Sidney was getting stuck with what he called an "I can't breathe" doyle. In the Reply I wrote to Marge, I gave her a way of addressing Sidney's recalcitrant doyle by doing a systematic reframing procedure. Neither Marge or Sidney had any training in NLP or psychotherapy, but they were able to do the reframing from the instructions below, so I am posting this material in the hope that it will help others who have difficulty with removing certain doyles.

A little background here on dissociation will be useful. Traumatic events, especially during childhood, are sometimes handled by creating a separate personality. We all have this form of multiple personality organization, but in these cases the multiple personalities do not communicate directly with each other and transit in and out of a person without them or others watching noticing. During a speed trace, if a person like Sidney had a protective personality Siddie who formed to protect him at age 9, let's say, then Sidney goes down the labyrinth till 9, then Siddie takes over the rest of the way down. As a result, the doyles will not erased, because the person is replaced before he completes the trace. I suspected that was what was happening to Sidney when Marge helped him do a speed trace. Sidney did not remove the doyle because the HOLD portion of the trace was broken --- Sidney let go of the doyle at 9 and did not complete his trace.

When this happens, it's necessary to communicate with Siddie and systematic reframing is one way to negotiate with this otherwise unconscious sub-personality of Sidney. It seemed worth a try and from followup reports by Marge, it seems to have worked. Remember: use the speed trace -- it will work for most people most of the time. This reframing techniques should be used only as a last resort after repeated attempts have failed --- it will help to break up the logjam and allow the speed trace to proceed smoothly. most cordially, Bobby Matherne Principal Researcher, The Doyletics Foundation P. S. the reframing procedure is quite useful for all kinds of problems, and any NLP book will enlighten you to other ways it can be used Marge wrote back:

I had lunch with Sidney and told him I had enlisted your help, describing the information I E-mailed. He asked if I had added these things specifically, so I will now. As he does the "I can't breathe" (ICB) trace the doyle gets stronger at 9,6,and 3 yrs. Sometimes after tracing the ICB doyle he gets what he called an "after" doyle of burning chest pain. He also told me that sometimes while tracing the I'm depressed doyle it changes to the ICB doyle at 9 years. Finally he told me that most of the time the ICB doyle is actually going away at 1day or minus 1day. I'm reading and processing the other stuff you just sent me and trying to figure what to use when. If these new twists give you any other ideas please forward them. Again words fail to adequately express, but THANKS

These 3, 6, 9 periods seem to be auras of significant combining events. Something happened at those ages to reinforce the original doyle, which it would seem likely that it happened during the day of birth, Day 0, the day between 1 Day and -1 Day.

The information I sent you is to indicate that some dissociation is happening that allows Sidney to keep the doyle WHILE doing repetitive traces. When something like this happens, it indicates that the doyle is performing some essential function, some good intention, which is the only way this essential function can be performed, up until now.

At this point I would suggest you do an NLP systematic reframing process on him.

Find out what the good intention is, or simply get his unconscious to acknowledge that it has a good intention by allowing him to keep the doyle. Finger signals are very useful for communicating with his unconscious mind. A lift of the finger indicates "Yes". "Would you ask the part of you that is responsible for the doyle if it would be willing to communicate with me in consciousness about this doyle -- if so, raise your finger slightly."

"Ask that part would it be willing to share with you its good intention by holding onto this doyle?"

"Would you be willing to share with me what the good intention is?"

"Do you have a part of you that is creative?" "Yes"
"Ask that creative part of you to create three new behaviors that would be equally effective at achieving the good intention of that part."

"Signal me when each new behavior has been created." [no need for it to share the three new behaviors with you, but okay if it does]

"Ask that part if will be willing to put these three new behaviors into effect, knowing that at any time, if they do not prove as effective as the doyle was at producing the good intention, it can go back to the original behavior and that will be a signal for your creative part to create three new behaviors?"
"Yes"

"Now imagine that you are standing on the grounds of the state capitol in Sacramento on a high platform and all of your various parts, 1000's of parts, are standing around you waiting for you to say something. Ask them if any one of them has an objection to any of the three new behaviors, would they come up and tell you what it is." [If no, you're done. If one comes up -- treat as signal to create a new behavior.]

If you'll follow this procedure, Sidney will create a new behavior or two or three that will be equally effective as his holding the doyle and the next doyle trace will work permanently (the internal sabotage that's currently going on will be defused).

If I can be of any further help, let me know,

Marge and Sidney were successful with the systematic reframing and Sidney was able to successfully do a trace to remove significant doyles that had been handicapping him is his relationships with fellow workers.

If you are having a problem removing a doyle, try the Systematic Reframing procedure with yourself or get a friend to help you.

Here is a Case Study in which Sylvia used Systematic Reframing on herself with great success. (Identity disguised.)

A few weeks after posting my Reply to Marge and Sidney, another user of doyletics, Sylvia, had occasion to do a systematic reframing to handle a problem with procrastination. It seems that if she kept putting something off, she'd get nauseated. Here's what Sylvia wrote:

My most serious problem is a pathological (yes I mean that) procrastination. I can't quite figure out how to trace myself on this. I did recently observe that when I am not doing what I should be doing it is because of physical symptoms particularly of nausea.

In my reply to Sylvia, I wrote:

1) Often symptoms are messages from your soul. See: http://www.doyletics.com/arj/caresoul.htm. The nausea is likely an indication that something about what you "think" you should be doing, some inner part of you doesn't want to do. You need to do a little six step reframing to ensure that you have a way of getting another signal from your unconscious if you remove the doyle of nausea. I suggest you use the Systematic Reframing process. [RJM: At this point, I directed her to the procedure described above.]

You want to find out what the good intention is of the nausea and come up with at least three new ways of achieving that good intention without the behavior you call nausea.

2) Next: the nausea is likely to be a doyle and easily traced. Simply wait until the next time you procrasinate, wait till the nausea comes up, then do a doyle trace. [Do this ONLY AFTER you have a confirmed speed trace under your belt. You need to learn out how to ride the bike before you take it on an important errand.]

Then you're cleared to solo indefinitely -- identify something as a doyle. If you're not sure, write a post to the List and someone will answer you what they think. But note this: it's easier to do a speed trace than to ask if something is a doyle or not. Simply ask your body if this is a doyle for you by doing a speed trace. If it is a doyle, the doyle will go away. If it didn't go away, either you slipped off the path down into doylic memory (if so, try it next time the doyle comes) or the physical body state you were experiencing was due to some physiological condition unrelated to a doylic memory.

Later I received this enthusiastic response from Sylvia:

Well I dove into doyles and your NLP suggestions and just wanted to let you know the nausea was to keep me from crying. I was holding back tears for which I was always punished when they appeared. (so sad) I brought back the forgotten experience of being hit and told 'there now you have something to cry about'. I asked my unconsious mind to substitute and got this: smile! sing! dance!

It was especially helpful to tell myself 'Nothing like this is happening to me now'.

Thank you from the bottom to the top of my heart!


Here's How Your Clients Will Look After a Speed Trace.
Click Here to Return to Counselor's Corner: