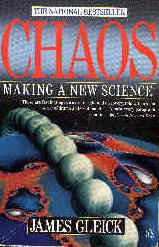 I had avoided this book for several months until a friend gave me a copy as a present. Once I began reading it I was delighted by the writing style as well as the information on chaos theory. The new paradigm created by the chaos enthusiasts is a paradigm that contains paradigm-changing as one of the explanatory tenets of itself. By containing the whole of itself (i.e., paradigms) within itself, the theory has a feature in common with the Mandelbrot Set which figures greatly in chaos theory.

Gleick provides a subject by subject presentation of each of the pioneers of chaos. Shaw and Mandelbrot are two of the first. Each worked in his own specialty on a field that didn't exist, working on mathematical curves whose connection to the material world didn't exist. They were in an odd position: mathematicians saw them as physicists and physicists saw them as mathematicians and neither group would have much to do with them (much less allow their papers in their journals). Some pioneering papers appeared in meteorological journals.

A physicist, two months from finishing his dissertation in superconducting theory, dropped out and began studying patterns on a screen. He founded a group of peers studying the funny pictures, all of them students, all of them who were soon to get lectures against wasting time studying a field which was not a field. "No field, no funds" was their persistent warning from their thesis advisors. In spite of the pressure, the group began to publish papers and attend conferences and show the connection between the theoretical curves and real-life processes. Soon the group would be sitting in a coffee shop playing a game of "where is the nearest chaotic structure?" It might be the water dripping from a spigot, swirls in a cup of coffee, or a leaf fluttering in the breeze. When I finished the book I began to perceive the world in a completely new fashion using my newly developed eyes of a chaoticist - a sure sign of a paradigm change. To achieve such a response in one small book is a magnificent achievement.