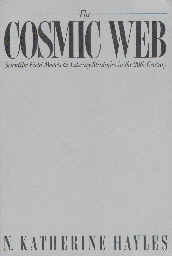 In this marvelous synthesis of art and science, Hayles spins a web of quantum and relativistic field theories and catches in it Robert Pirsig, D. H. Lawrence, Vladimir Nabokov, Jorge Luis Borges, and Thomas Pynchon.

Pirsig is drawn to the web to do motorcycle maintenance on his zen. On a trip of eternal return to the sea Robert and his son Chris meet the Buddha on the road and run him over with their motorcycle. In a key passage Pirsig discusses how we are like a man who takes a handful of sand and calls it the world. In truth we must include the man with sand in hand and his surroundings in our picture of the world. Hayles shows us in Pirsig's work the first glimpse of the innate recursiveness of the universe we live in. 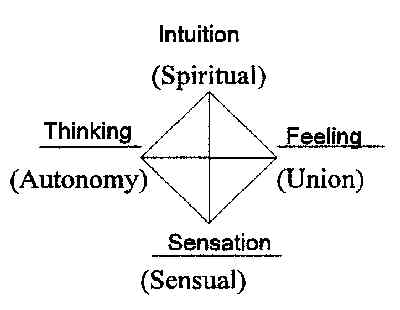 Once we accept this basic premise of recursiveness, Lawrence is a natural next step with his "subjective science." Like the new age channels Ramatha, Seth, and Lazaris, Lawrence appeals to us to verify the truth of statements by appealing to our own unconscious centers. Lawrence's two great tensions: "the polarity between the spiritual and sensual in the vertical plane; and the polarity between union and autonomy on the horizontal plane" remind me of Jung's four functions as I draw them in the following diagram (Lawrence's polarities are in parentheses):

In Nabokov's Ada, we find a nearly perfect symmetry in the lives of Ada and Van with just enough asymmetry to resist complete synthesis. The tensions in Ada are symmetry and asymmetry -- a fitting metaphor for which is the web.

In Jorge Luis Borges we find Cantor's infinite series and endless turnings in strange loops. Borges does not accept that the paradoxes of self-referential systems can be solved -- but rather intrigues us with the notion that, mirroring reality, their insolvability indicates that nothing is real.

Finally bending toward the point of no return in our cosmic web, we are ensnared by Thomas Pynchon. Like a web, Gravity's Rainbow can appear to some to be a "chaotic mass" and to others to have a "pervasive pattern." The two polarities that pervade Pynchon's work are the centrifugal (flying apart) and the centripetal (returning to center). Whether there is enough mass extant in the universe to one day reverse the expansion remains too close for cosmologists to call -- in Pynchon's work we find a similar ambivalence.