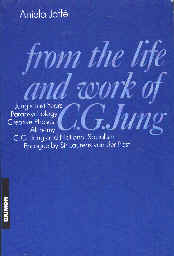 From the Life and Work of C. G. Jung
by
Aneila Jaffe
Jungĺs Last Years and Other Essays
Published by Chiron Pubs in 1989
Book Review by Bobby Matherne ©2002

Who better to write the story of Jung's life and works but the amanuensis of his last years, Aniela Jaffe. She here collects the writings of Jung from unpublished sources (his famous Red Book), her own reminiscences, and comments by Sir Laurens van der Post in a one volume thumbnail sketch of the man, Carl Gustav Jung.

From his earliest childhood dreams - the one-eyed phallic monster in the deep, hidden chamber that threatened to devour him - to his surly discontent with his physical limitations in his last years, she takes us behind the scenes to view up close and personal her friend, employer, and mentor.

One chapter is written to counter the still extant criticism of Jung as a Nazi sympathizer during the Second World War. What we discover through Jaffe and van der Post is a man who was a doctor first and gave solace to the enemy Nazi's as a doctor might. He maintained his leadership of the German Psychological Society and turned it into an international society exactly to move it away from Nazi dominance.

From his Red Book she includes this quote:

In this book we find a man who constantly reminds himself to go with the flow of life, to observe without interfering less the observed change its behavior and the learning moment be lost forever. Remembering always that his soul created the experiences for him that the conscious "He" didn't understand, he became curious about the smallest circumstances of his life, content to observe the passing panoply of life like it was a majestic epic created by his unconscious. Thus he lived out, outside of public purview, in his adult life the neurosis of his childhood that beckoned him to sloth and laziness.