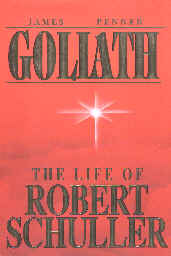 Robert Schuller lies near death from a head injury in Amsterdam when the book opens. Penner tells Sculler's life in flashbacks while Schuller awaits brain surgery and his family is flying to his side. The stories Penner tells in print all sounded familiar to me, having watched Schuller's Hour of Power since 1971 when I first discovered it on my home TV in Anaheim, only miles from his church in Garden Grove. On one bright Sunday morning my wife and I attended his church when he had Archbishop Fulton Sheen as his guest. After sitting through the services in the outdoor Garden Sanctuary, I shook hands with Dr. Schuller as we left. His hair was just beginning to turn gray then. (I remember that point of recognition when I saw the Tower of Hope on TV for the first time: "Look, isn't that the church on the front of my book, Possibility Thinking?" I pulled the book from my shelf and there it was. I became a TV member of his church from then on.)

The best stories Schuller told in his TV sermons were the true life ones and the most memorable of these stories are in the book. The tornado that flattened his family farm in Iowa. Nine farms were destroyed in the area; only the Sculler one was rebuilt. His first church in Garden Grove ended up in the Orange County Drive-in because it was the only place on his list of 10 possibilities that wasn't already taken. Rosie Gray in the old Buick in the back row: paralyzed from a stroke and barely able to speak. How she became a member and helped to build his first walk-in, drive-in church. His daughter Carol's motorcycle accident in Iowa and her parents long trip to her hospital from Korea. Her walking to Dr. Schuller's Amsterdam bedside on her new prosthesis for the first time. His shattering of a teacup on the tile floor in front of his son's feet after being lied to. "My trust in you now holds as much water as that teacup." His son reglued the cup and it now occupies a place of honor next to Arvella's precious teacup collection.

The stories fill this book and will fill the heart of any reader. The following is an excerpt from a college letter to Arvella which I have reformatted as a poem to illustrate Schuller's poetic flair with his prose:

deeper than any symphony
Yet like a hymn
It stills all worry,

all foolish fears
Because it hums in future years.

Schuller's visions and accomplishments all hum in future years and this book establishes the basis for the melody.