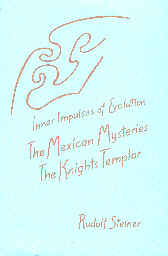 Anthroposophy: "the study of the relationship of man with the universe" undertaken "in the science of the spirit." Thus on page one the author gives his definition of anthroposophy in this series of lectures he gave in Dornach in the fall of 1916. From Atlantean times through the Mexican Mysteries to the cosmic knowledge of the Knights Templar Steiner takes us on a guided tour of the history of the world. He begins in Greece (where, "for the Greek soul, each word was [...] an outer gesture of a full inner experience) and leads us into Rome (where "the direct soul element, the kernel, the inner feeling we sense in Greek has been cooled in Latin"). In the Romans we find human relationship fashioned into law. Our very sense of what is right, our Western concepts of jurisprudence, we owe to Roman law. Then comes the Renaissance, that explosion of the imagination that burst the cold and logical chains of the Latin element remaining from ancient Rome.

Steiner contrasts Rome with Greece in ways that I have often contrasted Germany with France. These two northern European cultures comprise my ancestry and traces of both are equally distributed in me. The German (Roman) aspect of me is the cool, logical intellectual part and the French (Greek) aspect the gusty artist living in his feelings and his creative imagination.

The revelation I found most amazing was his point about the spiritualists of the last century who attempted to prove the existence of the spirit by mediumistic communication with spirits of persons that had died. In his words:

[page 73] What was to be expected was that by these means a knowledge would come about of the spiritual world that, at the present time, surrounds us while we are alive. That is what one might have expected to find by making experiments, for example, as to how one man affects another, how the men of the present time are linked together by secret threads invisible to ordinary science, how in one soul things arise that originate from quite another soul. In reality, a network of spiritual connections is drawn from soul to soul.

Thus, Rudolf Steiner describes the modern phenomenon of networking almost a century ago. "We are actually surrounded by a spiritual world just as we are by a physical." Few have said it better.