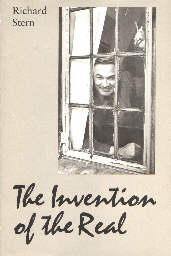 A READER'S JOURNAL, Volume 1
:
The Invention of The Real
by
Richard Stern
Published by University of Georgia in 1982
Book Review by Bobby Matherne ©2002

In this book of "orderly miscellania" Stern proceeds to "fire on the breeze," as one of his Venice students called it. He shoots the breeze about Borges, Mailer, Faulkner, Henry James, Nixon, and anyone or anything else that slows down as it passes him.

The book abounds with gems of wit and wisdom, such as:

"Is the Memoirs of Richard Nixon a good book? Does the earth have a good moon? It's the only one we have." And as one of Nixon's diary entries puts it, "you can see in the moon whatever you want to see."

I wrote a story once, a kind of parable about a man who began a very large picture, and therein was a kind of map, for example, hills, horses, streams, fishes, and woods and towers and men and all sorts of things. When the last moment came, when the day of his death came, he found he had been making a picture of himself. That is the case with most writers.


"There's a hole in the sky where the plane lives."

And on the book theme:


"So the stories convert the data of event into coherence which doesn't just transform actuality, but creates."

Thus the invention of the real comes from writing, whether it be fiction, interview, poetry, journals, or memoirs. Everywhere, like "Monet with a pen" Stern enlightens and entertains the reader with his words.

"How do you say anything new about a town where you can use a four-hundred-year-old map to get around?"

"forty million imbeciles who elect another who strips them bare."