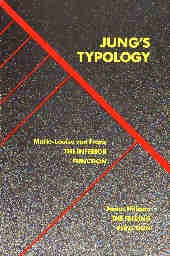 Von Franz covers the four rational and the four irrational types - she puts the thinking function at the top of her circular diagram, which aptly describes her. Her major contribution to the book is her exquisite anecdotal description of the inferior function. Through her analysis I was able to understand how my philosopher friend (intuitive introvert) insists on driving beat-up secondhand cars (won't pay more that $150 for a car, he said once): it's his inferior function (sensate extravert) which is displaying itself. Two components are necessary : 1) the opposite function is the inferior function: introvert -> extravert and intuitive -> sensate, and 2) the inferior function displays primitive development, i.e., the physical, externally displayed objects are primitive and poorly developed (the junk cars). I rode in his car one day to and from work and my feet were literally in a garbage can up to my ankles. The rear seat of my car resembles his car in that it is full of stuff that might look like trash to a casual observer (books, magazines, extra clothes, etc).

James Hillman's second half of the book is devoted to a careful exposition of the feeling type. The last 25 pages comprise a priceless description of feeling types and their characteristics. These pages bear some re-studying for novice feeling types such as myself. Many of the things he describes in these pages ring true in my experience.

His descriptions of feeling types are vibrant and fresh, such as, "style -a decayed extravagance, a dried-up display that is devoid of feeling." That sentence aptly describes why fancy sit-down dinners get a bad rap and why parties that combine style with freshness are such a hit. Hillman's exposition on style reflected his style better than any of his other writings. Read the last 25 pages even if you don't read the rest of the book.

My second reading of Jung's Typology after a space of four years was triggered by a friend's inquiry about types. I bought a copy of this book and sent it to him. In the process of discussing types with him, I opened the book and decide to read it all the way through again.

About halfway through an amazing revelation hit me about inferior function feeling types. There is a phrase in the vernacular for a person with a differentiated (or superior) thinking function and a primitive (or inferior) feeling function. The first word of the phrase refers to superior thinking ("smart") and the second word of the phrase refers to inferior feeling function("ass"). That insight led me to expand my typology diamond to include superior/inferior phrases for each of the four functions. See diagram at right.

Read the chart above and see if you can pinpoint your inferior function. My guess is it will be as hard for inferior thinking function types to understand the chart as it was for me to come to recognize a superior feeling type when I met one.