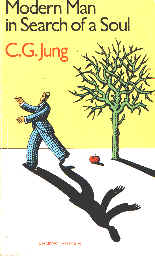 Starting with "dreams as facts", Jung ends with all facts as dreams, if we interpret the psyche as dreams. Jung avers the reality of the psyche clearly and concisely in several places. Here's one example:

If I change my concept of reality in such a way as to admit that all psychic happenings are real - and no other use of the concept is valid - this puts an end to the conflict of matter and mind as contradictory explanatory principles. Each becomes a mere description for the particular source of the psychic contents that crowd into my field of consciousness.

But this insight is not sprung on the reader out of the blue, but built up to by the careful editing of these assembled lectures of Jung. In the first lecture he describes the four types of psychotherapy: confessional, interpretational, educational, and transformational. These four types he builds into a pyramid with confessional at the base. For some patients, he says, it is enough to confess their faults and sins to go on with their lives. For others, the confession is not enough, but interpretation of the meaning of their transgressions is required before they can continue their development. For still others, the interpretation helps, but leaves them helpless as a child to deal with the new insights. Only through education can they proceed to build a normal life.

While the Freudian school might leave the patient in such a childlike state, the Adlerian school would educate them in the social skills necessary for their next stage of life development. For some patients the educational phase turns out to be superfluous, coming at a stage in their life when they already have the social skills necessary. For these, only a therapy that deals with transformational issues will suffice. This is the contribution of Carl Jung, to put the capstone on the pyramid of psychotherapy. He created his analytical psychology for these very patients, for whom mere confession, interpretation, or education is not sufficient, because they crave for a transformation in depth, one not achievable by these three. For this reason Jungian therapy is sometimes referred to as depth psychology.

In other lectures Jung lays the groundwork of his psychology of types, describes the state of archaic man, details his analytical psychology, and finally as the question "Should a patient go to a psychotherapist or a clergyman?"

If you have been put off by the polysyllabic prose of the ponderous tomes in the Collected Works of Jung, this book will serve you as a fine introduction to his more detailed works. This book is an introduction to Jung's works by Jung himself. He covers the major issues of his life's work in a manner easily comprehended by the layperson. I wish I had read this book first.