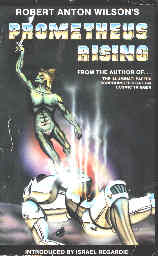 Those of you who enter the 1990's without reading Prometheus Rising are likely to be surprised and shocked, whereas those unfortunate few who have read it can only be disappointed as our global reality tunnel falls somewhat short of Robert Anton Wilson's. His reality tunnel is really eight tunnels (or circuits as suggested by Timothy Leary). The first four tunnels comprise biological survival circuits and map handily unto Jung' quartenary, the Star Trek crew, and many other fourplex divisions of human archetypes.

The first reality tunnel is the "oralbiological circuit" of Scotty - the sensate engineer who holds the starship Enterprise in greater esteem than his esteemed Captain Kirk. ("She can't take any more power, Captain.") The second reality tunnel is the "anal- emotional circuit of Bones(Dr. McCoy) - the bio-emotional feeler who administers to the crew's feeling function as well as he does to their physical bodies. (Have you no feelings, Spock?) The third tunnel is the "time-binding semantic circuit" of Alfred Korzybski as typified by Mr. Spock - the cerebral Vulcan, the quintessential thinker who applies logic to all problems and occasionally solves real-life Star Trek problems that way. The fourth reality tunnel is the intuitive "neo-cortex circuit" of Captain Kirk who comes up with unexpected, unpredictable, and illogical strategies that provide solutions to dilemmas that each of the three lower circuit reality tunnels was unable to solve.

RAW's circuits 5 through 8 reiterate these four, but at a higher level. The earthy Mr. Scott at the "neurosomatic circuit 5" becomes the 60's Woodstock love child, the emotional Dr. McCoy at the "neurosomatic circuit 6" becomes the 70's gestalt therapist, the computer-like Mr. Spock at the "metaprogramming circuit 7" becomes the 80's neurolinguistic programmer, and the out-of-the-blue Captain Kirk at the "non-local quantum circuit 8" boldly goes where no man has gone before.

From the first chapter where RAW shows us that reality is metaphor "all the way down," he maintains a breathless quickstep pace of ideas right through the last chapter with its whirling revolutions of consciousness occurring every century, then every generation, then every decade, then every year in tighter and tighter spirals of growth, culminating in physical immortality and mass migration into space by 2010. Whether you find quarters using his Chapter 1 exercise or not, you found this book and the reading of it can be its own reward - a Michelin guide to the reality tunnel of the New Age cornucopia fast upon us.