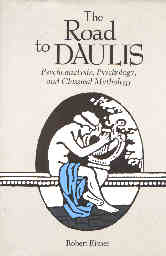 This book, had it lived up to its advance billing, would have been a major slam on Jung and his fellow travelers in the manner of James Hillman and Colin Wilson. Instead, what developed was an intriguing academic treatment of mythology that fleshed out for me several of the Greek gods -- providing aspects of their very human personalities that more cursory treatments have missed. Eisner's treatment of Narcissus, Apollo, and Dionysus was particularly good.

There was an undercurrent of dislike for Freud and Jung which rose to the surface, swirled a bit, and dropped out of sight from time to time, unlike Colin Wilson's "C.G. Jung, Lord of the Underworld" which was like white water rapids by comparison to this book. Eisner calls Joseph Campbell "one of the most naive of Jung's explainers." He propounds his thesis that verbal therapy predated Socrates and gives as scanty evidence a quote from Plato. His most scathing attack on Jung centers on the liberal interpretations made by Jung of myth being "untrue" to the facts or too true to a particular fact (one version of a myth versus another).

In keeping with his title the author spends a lot of time on the road with Oedipus. He points out that, had Oedipus possessed an "Oedipus Complex," he would have killed his adopted father and married his adopted mother since, for all he knew, these two were his actual parents. This argument illustrates the process Eisner uses in most of "Daulis" as he shifts his focus from myths to gods to therapy and culture.

For the author's perspective on Freud and Jung (from p. 84):"The reader of Jung, tired and dizzy from the interminable comparison of one image to another, yearns for some hard-headed distinctions. But the intensity of his writings is an emotional one, not well suited to discriminations. The intensity of Freud's prose ... is rather intellectual. One can argue with an intellectual's statements; one can only assent to or dissent from the teachings of a divine." It was clear that Eisner loves an argument and thus joins Jung's detractors in their dissent. By the end of the book one suspected that under his veneer of argument is a deep respect for Jung's work when he says of symbolism, "This, if it is a therapy at all, is one in which the patient must be prepared to work far harder than the physician..."