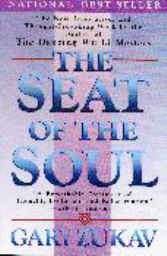 The Seat of the Soul by Gary Zukav

Borrowed this book from a friend and read it quickly over the weekend. I was very disappointed in Gary. His "Dancing Wu Li Masters" was a ground breaking book on the order of "Tao of Physics" by Capra. This book is Zukav's version of Capra's "Turning Point." Having created an audience for his thoughts on the parallels of modern physics and Chinese philosophy, Zukav trudges off the physics path in his version of Aristotle's "Physics II" - Metaphysics.

Into his metaphysical tossed salad Zukav throws greens (environmental concerns), croutons (small chunks of hard physics), tomatoes (boy-girl relationships), salt and pepper (joy and grief). He blends all this with a bland ranch dressing of pseudo-spiritual mush(low calorie, of course) and serves it. After a large portion of it, you find yourself hungry for some real food. Alas there is none in this book.

Like looking for meat in a soybean hamburger, one looks in vain for robust nourishment in this book. One tasty morsel is served up near the end of the book, however, when Zukav describes anxiety attacks as a "leaking of energy from the power center." Outstanding for its novelty, this new idea stands apart from the remainder of the book: an aromatic American Beauty among plastic K-Mart tulips.

The final chapters are filled with homilies for a new age morality. I suppose I had come across all the ideas before (except for the anxiety attack one) or else I might have been more impressed by this book. Even so the book was not even a good summary, synopsis, or even introduction to these ideas. It was more like an amorphous oil slick off the coast of Alaska. With the right wind some of the concepts will change the coastline of the reader, but not in a particularly edifying manner. (Not recommended for a permanent addition to your library.)