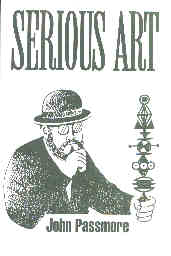 "It has been the fate of the arts to be enveloped in mysterious and incomprehensible language." Passmore quotes Sir Joshua Reynolds in Chapter 1. By writing this book, Passmore begins his process of removing some of the mystery of art by making comprehensible distinctions between the commonplace and "serious" art. Every chapter is chock full of distinctions made by well known artists and critics of art and literature. The Index of Names and Key Terms is a veritable catalog of literati and cognoscenti going back to Aristotle and Plato. Sandwiched in the index, e.g., one can find Van Gogh between Paul Valery and Van Hecht, Telemann between Tati and Thackeray. From painting to poetry, music to emotions, calligraphy to criticism, Passmore covers all the bases. In an encyclopedic sweep he thumbnails every art that might be considered a "serious art" - even pointing to the origin of the term "serious" as applied to art in Shaw's preface to Three Plays for Puritans, and pointing out how from this initial reference to "serious literature" by Shaw, we came to refer to "serious" art as those works that are the highest and best in their category, whose artistic values endure over time.

My concept of "Art is the Process of Destruction" had developed several weeks before I began this book -- in fact I began reading it for further insights into what expert critics of the arts said about what art. About halfway through it, I wrote my essay "Art is the Process of Destruction" in which I laid out my insights into what constitutes the essence of art, what Passmore calls "serious art." In the paper I elaborate how serious art destroys sameness whereas non-serious art perpetuates sameness. In every chapter I found multiple confirmations of my insight without ever encountering the insight stated so succinctly: "Art is the process of destruction." Here are some examples from the book:

William Blake - "[to be an artist is] to cast off the rotten rags of memory by inspiration."

Joyce Cary - "[the challenge of writers is] to write about the commonplace without falling into clichés ... even if they succeed momentarily, their very success may create new clichés."

John Passmore - "This is not to say that this book contains no generalizations, that it's import is totally destructive. (Although if what is destroyed is nonsense, destructiveness is far from being a vice.)" [italics mine]

Yes, and if what Passmore refers to as nonsense, we come to see as sameness (i. e., clichéd repetition of a form or style, i.e., kitsch), we can see that destructiveness is the very heart of works of serious art in every field, that art is truly the process of destruction.