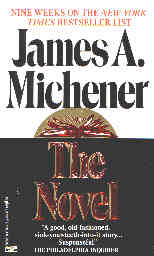 A READER'S JOURNAL, Volume 1
:
The Novel
by
James A. Michener
Published by Ballantine Books in 1991
Book Review by Bob Matherne ©2002

"The Novel is a work of fiction. The characters in it have been invented by the author, and any resemblance to actual persons, living or dead, is coincidental. The story is also fictitious." Going to such lengths to ensure the reader that the book is fiction causes one to wonder if Michener "protesteth too much" and if much of the content of the book actually happened to him. On page seventy-five the fictitious Yoder tells us that the endpapers were done by the artist, Jean-Paul Tremblay. On the flip of the title page, credit is given to Jean Paul Tremblay. Such propinquity in one area makes one wonder about the rest of the book.

Readers are cautioned not to miss the CONTENTS page or they may wonder in Chapter Two how Yoder could have been a tomboy. The first chapter deals with The Writer, and the rest deal with The Editor, The Critic, and The Reader.

The Writer, Lukas Yoder has just finished his eighth book in his Grenzler series. We follow him through the well-practices motions he goes through after the completion of his novel. As he visits his friend who checks his book for Pennsylvania Dutch authenticity, we enjoy a fresh-baked German rice pudding with him. When he visits his editor, Ms. Marmelle in New York, we sit in on the conferences about the subsidiary rights and international rights of his earlier books. When he returns home, we look over his shoulder in his workshop as he converts old hex signs hacked from collapsing barns into finished art works.

The Editor, Ms. Marmelle, tells us how she came to be an editor, starting as a go-fer in the secretarial pool, then being assigned to Mount Dreck, the over the transom submissions pile. Her biggest difficulty in that job was holding to the one in nine hundred goal. She was severely reprimanded and told to hold her recommendations to the editors to a maximum of three in nine hundred. One of her submittals was Yoder's first novel and she was assigned to be the editor for its publication.

The Critic, Karl Streibert, we also follow as he grows into a full professor of English at Yoder's alma mater, Mecklenberg College, a tale complete with a raffish summer affair in Athens. Streibert loves great writing and detests Yoder's plodding style. In spite of that, Ms. Marmelle becomes his editor. Streibert grows several writing proteges, the two most prominent being Jenny Sorkin and Timothy Tull.

The Reader, Jane Garland, turns out to be the grandmother of Timothy Tull in the fourth and last chapter, during which a murder occurs and is solved in short order by the writer Yoder and his Dutch friend.

Each chapter shows the book process from a different angle and reflects light in the hidden recesses of the other chapters, till in the final chapter all the action is brought together by murder. Michener tells a masterful tale about a writer and his milieu, which we must suspect closely parallels Michener's own.