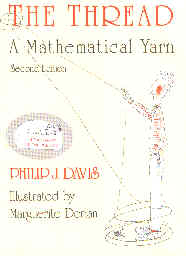 Get ready for a pafnutying good time as you follow this mathematical thread that begins with a letter questioning the author's spelling of Tschebyscheff in his book on numerical approximations. While tracking down the variety of acceptable ways of spelling this surname, the author begins also tracking down the unusual Russian first name of Pafnuty.

Soon the author has developed a mania for tracking names that takes him to reading the story of the Desert Fathers, hippopotami in the Nile, the pharaoh's pyramid builders, and traveling to Tasmania, Jerusalem, among other exotic places. In this book he changes the mania into a series of delightful stories.

One of these stories involved Thaïs the whore turned saint, whose tale were in many ways in the Fourth century. The author discovered this thread from his daughter who suggest he look up Hrotsvitha of Gandersheim. Finally he located a Hrotsvitha club, and drove to Greene, Rhode Island, to meet a former official who later posted him a copy of the Collected Plays of Hrotsvitha(1). When he opened it, there on page 83 was the play Paphnutius, starring Paphnutius, a hermit, and Thais, a courtesan. Later Davis discovers a reference to two tombs in Lower Egypt during an excavation in 1899. One tomb was inscribed with "Here lies blessed Thaïs" and:

In the crumbling coffin, the remains were surrounded by a number of religious objects not characteristic of other tombs in the same cemetery. There was a sacrament case of palm fibers, an ancient rosary of wood and ivory, a rose of Jericho, the symbol of immortality and resurrection, and, found between the fingers of the skeleton, a cross in the form of an ankh, the symbol of life and rebirth. There were also some palm leaves signifying a martyr's triumph.

In a nearby grave, they found the remains of a monk in a brown robe. No inscription but on a potsherd nearby they found the inscription "Serapion, son of Kornosthalos." In the various plays about Thaïs, the Man of God is either Paphnutius or Serapion.

For those verbophiles among us, who do not consider a book or article complete unless we learn at least one new word from it, I offer Philip Davis's contribution: "pafnuty, v. i., to pursue tangential matters with a hobby-like zeal."

Footnote 1. In a new book on Thoreau, Kevin Dann notes a connection between Hrosvitha and Rudolf Steiner's mentor in Vienna.

"Steiner had researched the karmic history of an extremely important mentor in his own life — Karl Julius Schröer, his teacher at the Institute of Technology in Vienna, the man who in 1882 recommended Steiner to write the introductions to Goethe’s botanical, zoological, geological and color theory writings for an edition of Goethe’s collected works. From his research, Steiner discovered that Schröer had been the tenth century playwright Hroswitha, and before that, Plato."