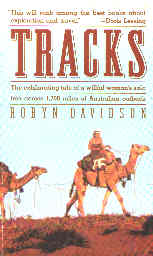 The exhilarating tale of a willful woman’s
solo trek across 1,700 miles
of Australian outback.
Published by Pantheon Books, A Division of Random House in 1980

Robyn Davidson began with a simple idea: head for Alice Springs, capture three wild camels, and trek across the 1700 miles of desert to the Western Coast of Australia. After two years of taming camels and that wildest beast of all, herself, she set off on her journey, but not before she has nose-pegged, hobbled, tracked, injected, castrated, and killed camels during her camel training preparations for the trip.

Determined to make her trip alone to best understand the desert and the ways of its indigenous people, the Aborigines, she caved in at the last moment and accepted support from National Geographic for her trip. This brought with it ample funds, periodic visits from Rick, the photographer, and an unwanted infamy by the end of her trip. She makes it clear in her writing that the photographs Rick took recorded his trip not hers.

Robyn's trip was a communion with the desert, her dog Diggity, and her camels. Each day started with an hour or so of packing 1500 lbs. of gear on her camels, after she had located them. Camels, in order to forage naturally, had to be hobbled at night. This necessitated tracking them down in the morning and returning them to camp. During an early leg of her trek an Aborigine, Eddie, accompanied her for 200 miles. Eddie was "healthy, integrated, whole" and "If," she writes, " 'to be truly civilized, is to embrace disease,' then Eddie and his kind were not civilized."

After months of walking twenty miles a day through the desert, every step thinking over her life's experiences, recalling every event in crisp detail, she experienced a "giant cleansing" and a "gentle catharsis". Dropping every last vestige of civilization, at times she walked dressed only in her sun-toughened brown skin, oblivious to cuts, nettles, and bleeding. She had become a creature of the desert, acclimated to its every nuance of terrain, flora, and fauna. When she reached the abandoned settlement at Carnegie she was shocked to find an even more desolate place than she had been, "man's desert", where overgrazing by cattle had eliminated many species of naturally occurring plants, replaced by poisonous ones such as the turpentine bush. When she encountered two men who had traveled by jeep through the same region, she was appalled that they hadn't even noticed the change.

In a day when travel over long distances is seldom made at speeds below 70 mph, Robyn Davidson takes us through the uninhabited desert in slow motion and shares with us her recovery of herself along the way.